A group of dried bonito flake makers, along with one distributor, aim to spread the key ingredient for soup stock and dishes in Japanese cuisine in European countries. Construction is set to be completed for the 2015 world exposition in Milan next May. 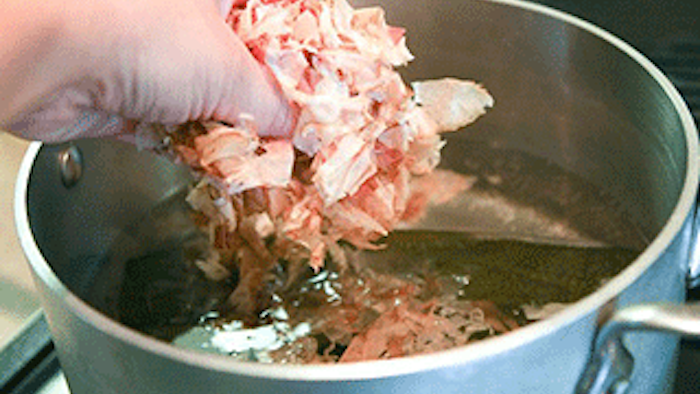 TOKYO (Kyodo) — A group of Japanese traditional "katsuobushi" dried bonito flake makers in Kagoshima Prefecture will set up a factory in France to start production next year, with the aim of spreading the key ingredient for soup stock and dishes in Japanese cuisine in European countries.

Participation in a food exhibition in France in May last year led the group based in Makurazaki in the southwestern Japanese prefecture to plan the launch of a plant in Concarneau in the Brittany region of northwestern France, says Yoshihiro Kominato of the Makurazaki Marine Products Processing Industries Cooperative.

The cooperative, an umbrella organization of 10 bonito flake makers in Kagoshima and one distributor from nearby Fukuoka Prefecture, aims to complete the factory construction in time for the 2015 world exposition in Milan themed on food, which will open next May 1 to exhibit the product at the event.

"Local visitors to the food exhibition seemed to like katsuobushi after they tasted it," Kominato said.

But he added participants in the event from Makurazaki noticed when they had miso soup at a Japanese restaurant in France that bonito flake was not used for the soybean paste soup. "This has caused us to do something about it, as we wanted locals to have real Japanese soup, which is incomplete without katsuobushi," he said.

"The casual talk of that day resulted in establishing the plant as members of the Japan Food Industry Association, who were also present there, showed interest in extending their support," Kominato said.

In July last year, the Kagoshima organization formally announced its France project, prompting the association, which promotes the Japanese food industry, to introduce the cooperative to the Invest-in-France Agency, a government agency prompting investment in France.

The Makurazaki makers were eventually put in touch with the Bretagne Commerce International, which provided them with local information and helped liaise with potential partners to establish the plant.

"Unlike typical foreign investor projects whose decision-making process is generally spread out over a two-year period, the decision to set up a plant was very quick and no doubt fueled by increased demand from now ripe European markets," BCI Managing Director Vincent Chamaret said in a statement earlier this month.

Attributing fast progress in the investment procedure to the efforts of the BCI, the Invest-in-France Agency also said the "passion" of the Makurazaki cooperative has equally contributed to the quick decision making.

Referring to the European Union's strict food import rules, Kominato said, "To be able to export katsuobushi to EU countries, one has to clear all the rules from landing bonito to processing the fish according to the EU standards, which are quite difficult to fulfill."

"There's a high demand for the product in France, as the country has more than 1,000 Japanese restaurants," he said.

The registration of traditional Japanese cuisine as an intangible cultural heritage by the U.N. Educational, Scientific and Cultural Organization last December has all the more heightened the popularity of Japanese food and boosted its demand all over the world, he said.

Makurazaki France Katsuobushi Co., which was newly established in April for the project, plans to hire six workers and achieve daily output of 200 kilograms at the envisioned bonito flake factory, with the aim of supplying the product to distributors and Japanese restaurants in the European Union.

At the plant, bonito caught near Mauritius and the Seychelles will be processed, Kominato said, adding that one or two French employees will be trained in Kagoshima.

"We aim to use the product for soups or as toppings in French dishes, in addition to using it for Japanese cuisine," he said. "We're planning to exchange views with local chefs in the future to explore ways of its usage in various dishes."

Concarneau was chosen as the plant site due to reasons including the availability of a cold storage warehouse nearby, which is required for keeping bonito at low temperatures, easy shipment of raw materials as the port city faces the Atlantic Ocean, and robust fishing industry in the area, according to the Invest-in-France Agency.

The Makurazaki cooperative already has katsuobushi production bases in Southeast Asian countries including Indonesia, Vietnam and the Philippines for export to Japan as well as consumption at local Japanese restaurants. At present, Vietnam-made bonito flake is shipped to France.