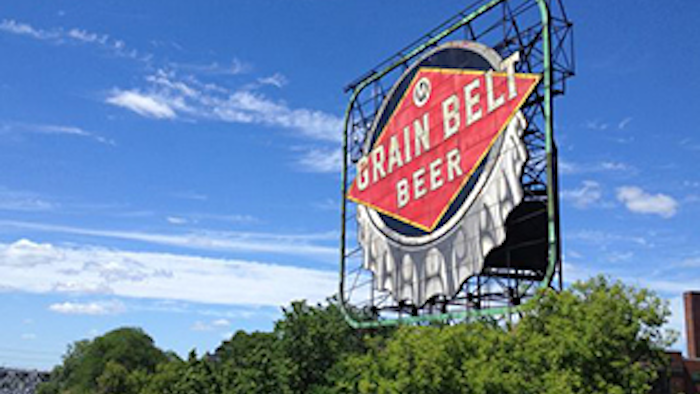 NEW ULM, Minn. (PRNewswire) — August Schell Brewing Company, the Minnesota-based brewer of Grain Belt Beer, has reached an agreement to purchase one of Minneapolis' most-recognized landmarks — the iconic Grain Belt Beer sign on Nicollet Island. In connection with the purchase, the brewery is in the process of discussing plans for preservation and relighting of the historic riverside sign with the Preservation Alliance of Minnesota.

"As the stewards to a 154-year old brewery and family business, we understand the importance of preserving heritage. We are honored to have this opportunity to protect and restore such a beloved part of the Minneapolis landscape," said Ted Marti, President and fifth-generation descendant of brewery founder, August Schell. "Working in concert with the community, our goal is to preserve and relight this important remnant of the city's industrial and commercial past."

"This historic sign is a unique resource and a valuable part of the city's character," said Doug Gasek, Executive Director, Preservation Alliance of Minnesota. "We're looking forward to working with the August Schell Brewing Company to rehabilitate and relight this prominent riverfront landmark, making it accessible for future generations to enjoy."

If the discussions with the Preservation Alliance of Minnesota and other due diligence lead to the conclusion that the sign can be relit, the closing on the purchase of the land and sign is expected later this year, which is when more details about the sign's preservation and relighting will be available. For more information on Grain Belt, visit grainbelt.com.

August Schell Brewing Company (Schell's) specializes in brewing quality craft beer and boasts a proud heritage of 154 years of continuous family ownership. Founded in 1860 in New Ulm, MN, Schell's is the oldest brewery in Minnesota and second oldest family-owned brewery in the United States. It became the largest brewery in Minnesota when the company acquired Grain Belt Beer in 2002. From innovative German brews to award-winning American lagers, the Schell's brewing process begins and ends with quality-crafted beer. For more information, go to www.schellsbrewery.com.