Photo of the Day: 1866 Beer Cellars Nominated as Historic Site

A state Department of Historic Resources board recently voted to add the brick and granite remnants of the James River Steam Brewery to the Virginia Landmarks Register and nominate it to the federal list aimed at protecting America's historic and archaeological resources. 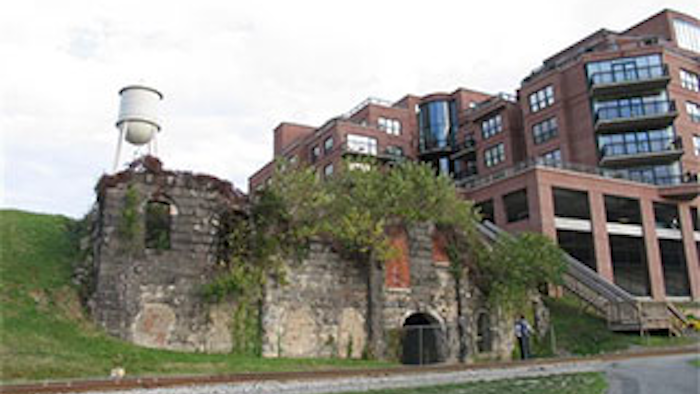 (AP) — This undated photo provided by the Virginia Department of Historic Resources shows the brick and granite remnants of the James River Steam Brewery built in 1866 along the James River is seen in Richmond, Va.

A movement is brewing to place the beer cellars on the National Register of Historic Places. Founded the year after the fall of Richmond to Union troops, the brewery was established by David G. Yuengling Jr., son of the founder of “America’s Oldest Brewery” in Pottsville, Pa. The brewery operated for about 13 years before closing as part of the depression that hit with the railroad credit crisis. (AP Photo/ Department of Historic Resources)

RICHMOND, Va. (AP) — Along the bank of the James River in Richmond and next to luxury condominiums, a movement is brewing to place beer cellars built in 1866 on the National Register of Historic Places.

A state Department of Historic Resources board recently voted to add the brick and granite remnants of the James River Steam Brewery to the Virginia Landmarks Register and nominate it to the federal list aimed at protecting America's historic and archaeological resources. The honor would allow for the property now owned by a company developing an urban residential and mixed-use community to be eligible for federal tax credits and qualify for historic preservation grants.

Founded the year after Richmond fell to Union troops, the brewery was established by David G. Yuengling Jr., son of the founder of "America's Oldest Brewery" in Pottsville, Pa. There, river boats tied up at the brewery's dock and trains stopped along the railroad to move beer from the series of vaulted tunnels onto boats and train cars bound for places unknown.

Of the more than 89,500 listings on the National Register of Historic Places about 80 are brewery or beer-related sites, but none are in Virginia.

In February 1867, the Richmond Whig newspaper featured the brewery, calling it "one of the finest breweries in the whole country" capable of producing 400 barrels, or 12,400 gallons, per day. The vaults underneath the brewery were capable of holding 6,000 barrels, the equivalent of nearly 2 million 12 oz. bottles, the newspaper said.

"Now here is an enterprise of great magnitude (that) just commenced its work, furnishing employment to a number of hands and affording facilities for dealers in porter, ale and beer," it said.

The brewery complex also included a beer garden and pavilion, as well as landscaped grounds that remained a popular picnic spot even after the brewery closed, according to the nomination form to the national registry.

The paper also noted an advertisement in which the brewery offered to give farmers seed barley on credit and then buy the crop when it was ready.

"There is no use in our talking of elevating the state from its depressed condition if we don't co-operate with those who are able and willing to give us a helping hand," the newspaper said.

Years later, the brewery once again graced the pages of the newspaper when a keg of beer, first mistaken for printer ink, was delivered there on Christmas Eve 1874.

"A thirsty crowd soon gathered around the keg, and ere long it was tapped. 'Ye gods,' what nectar was there! Glass after glass was emptied and quaffed with exclamations of satisfaction, and utterances of best wishes for the success of Richmond beer. A resolution was unanimously adopted that we must sustain Mr. Yuengling in his efforts to revive the beer interest of Richmond."

Despite the paper's pledge, the brewery closed in 1879 as part of the depression that hit with the railroad credit crisis that led to the Panic of 1873.

Yuengling was later quoted in the Staunton Spectator, saying he put $500,000 into the brewery and "came back without a dollar."

"No brewer has been successful in the South," he said. "They won't drink beer."

A fire then leveled the brewery in 1891, leaving the cellars to illustrate how beer was once fermented and warehoused before the widespread use of mechanical refrigeration.

The cellars have stood vacant since the fire. They are divided into four vaulted tunnels, the largest of which is 146 feet long and 10-to-17 feet wide. Water that continues to seep into the cellars through the ceiling have concealed the floors under a thick layer of mud and standing water.

The industrial property containing the massive cellars changed hands over the years, eventually being demolished by bulldozers in the 1970s. Since 2007, Rocketts Landing has been home to luxury condominiums, as well as other homes and businesses. Richard Souter, an executive with developer The WVS Companies, said the hope is to covert the old beer cellars into a restaurant by the end of 2014.

"Given that it's a 150-year-old structure, it's in incredibly good shape," Souter said. "It's certainly stood the test of time."