Global fast-food giant McDonald's is feeling the heat from hundreds of protestors outside of its Chicago headquarters. The protestors, who took up their fight a year ago in New York City, demand higher wages during a high-profile shareholder's meeting. 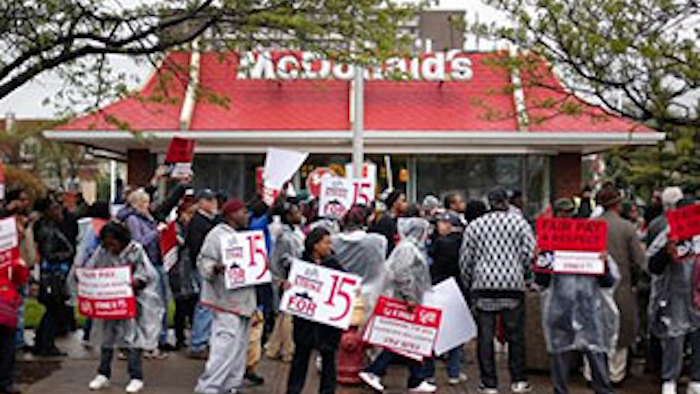 OAK BROOK, Ill. (AP) — Hundreds of protesters are expected to call on McDonald's to raise pay for its workers outside the company's headquarters Wednesday.

The demonstration comes ahead of the fast-food chain's annual shareholders meeting Thursday, where it is also expected to be confronted on issues including marketing to children and its pay for executives.

Protest organizers say they changed the location of their actions early Wednesday after learning that McDonald's cleared out the building where they had planned their actions.

McDonald's says it encouraged employees to work from home to assist police in addressing the actions and related traffic.

While other chains such as Burger King and Taco Bell engage in similar practices, McDonald's Corp. is often the target of critics because of its size and high profile.

The fast-food protests in particular have put pressure on McDonald's since they began in New York City more than a year ago. The push is intended to bring attention to the working conditions of fast-food workers and is being backed by the Service Employees International Union, which has more than 2 million members.

The protests have struck a chord at a time when the gap between the rich and poor has widened. President Obama has also been trying to raise the federal minimum wage of $7.25 an hour, which was last increased in 2009.