Photo of the Day: Pope’s Kitchen Goes Kosher for a Day

For just one day, the kitchen of the Vatican hotel where Pope Francis lives went kosher to serve a four-course lunch Francis hosted for a dozen Argentine rabbis last week. Rabbi Jaakov Spizzichino oversaw the scrupulous cleaning of countertops, the boiling of utensils and the heating of the oven to render it fit for cooking under Jewish dietary laws. 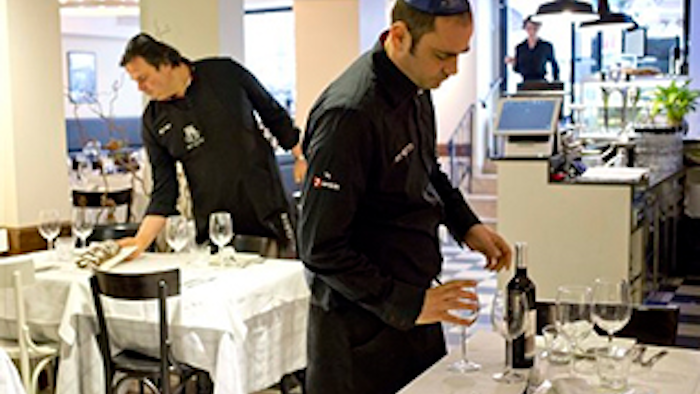 (AP) — Ba'Ghetto restaurant owners Ilan Dabush, left, and his brother Amit work in their restaurant, during an interview with the Associated Press, in Rome, Monday Jan. 20, 2014.

For just one day, the kitchen of the Vatican hotel where Pope Francis lives went kosher, with Rabbi Jaakov Spizzichino overseeing the scrupulous cleaning of countertops, boiling of utensils and heating of the oven necessary to render it fit for cooking under Jewish dietary laws. The occasion? A four-course luncheon Francis hosted last week for a dozen Argentine rabbis. Francis was hosting Rabbi Abraham Skorka and about 15 other rabbis from Buenos Aires who came to Rome en masse to visit their old friend, and the Vatican pulled out all the stops. Organizers turned to Ba'Ghetto, one of the best kosher restaurants in Rome's ghetto on the other side of the Tiber River, to cater the affair. "I decided to do it simple, because the pope is simple," said Amit Dabush, Ba'Ghetto's Israeli-born co-owner. "But the menu was full: He had to make a 'bella figura,'" or a good impression on his guests. (AP Photo/Alessandra Tarantino)

VATICAN CITY (AP) — For just one day, the kitchen of the Vatican hotel where Pope Francis lives went kosher.

Rabbi Jaakov Spizzichino oversaw the scrupulous cleaning of countertops, the boiling of utensils and the heating of the oven to render it fit for cooking under Jewish dietary laws.

The occasion? A four-course lunch Francis hosted for a dozen Argentine rabbis last week. It was another sign of his close friendship with Jews, despite some complaints in Israel that he's giving the Jewish state short-shrift on his upcoming trip to the Holy Land.

The Vatican has hosted kosher meals for visiting Jewish delegations on several occasions, and Francis famously provided kosher takeout for one of his best friends, Rabbi Abraham Skorka, when Skorka stayed with him at the Vatican's Santa Marta hotel last year.

But the Jan. 16 luncheon in Santa Marta's dining room was a special occasion that warranted more — including the extensive, rabbinically supervised sterilizing of the hotel kitchen that on-site kosher cooking entails.

The Vatican pulled out all the stops as Francis hosted Skorka and about 15 other rabbis from Buenos Aires who came to Rome to visit their old friend. It turned to Ba'Ghetto, one of the best kosher restaurants on the other side of the Tiber River, to cater the affair.

"I decided to do it simple, because the pope is simple," said Amit Dabush, Ba'Ghetto's Israeli-born co-owner. "But the menu was full: He had to make a 'bella figura'" — a good impression — on his guests.

To do so, however, required on-site cooking, and that required Dabush and Spizzichino, a kosher inspector with Rome's chief rabbinate, to sterilize the small kitchen off the main dining room kitchen.

A key issue was the oven: according to Jewish dietary laws, an oven in a non-kosher kitchen must sit idle for 24 hours and be cleaned and turned on full blast for an hour to sterilize it, Spizzichino said. So on the morning of the luncheon, Dabush, some restaurant workers and Spizzichino set to work early: scorching the oven and burners, scouring the kitchen countertops and covering them with aluminum foil to prevent the kosher food from being contaminated. They boiled and sterilized the big pots used for making pasta and set the tables with Ba'Ghetto's own plates and utensils.

"It was a kitchen that they rarely used, so it was very clean," Spizzichino said.

The menu was heavily fish-based: antipasti of deep-fried artichokes; baked sardines with endive and tangy, grilled zucchini. The pasta course featured two selections: gnocchi with rocket, tomato and pine nuts, and hand-made trofie, or little twists of pasta with sea bass and tomatoes. The main course had two choices of fish: baked turbot wrapped with vegetables or the house specialty, salt cod with tomatoes, pine nuts, grapes and potatoes.

Given the palates of his Argentine guests, Francis also offered beef filet with a Barolo wine reduction, which most chose, though he himself stuck to fish. Salad and roasted potatoes came next followed by desert: two torts of chestnut and sour cherry, and the pope's favorite, pistachio mousse, made with a soy-based creamer imported from Israel to substitute the dairy that isn't allowed in a kosher meal featuring meat.

In an interview with Vatican Radio, Skorka — with whom the former Cardinal Jorge Mario Bergoglio wrote a book about faith — said the rabbinical delegation came to Rome to "show our affection, our support, and seal our friendship, not just personal but as a group."

He said he couldn't wait to pray at Jerusalem's Western Wall with Francis during his May 24-26 trip to Jordan, Israel and the West Bank.

The trip, however, has caused some consternation in Israel given that Francis' predecessors — Popes John Paul II and Benedict XVI — spent significantly more time in Israel during their landmark visits and celebrated Mass in Israel proper.

Francis' current plans for religious services only include a Mass in the Palestinian town of Bethlehem in the West Bank and an ecumenical service with the spiritual leader of the Orthodox Christians at Jerusalem's Holy Sepulchre church.

"It's wonderful that he's coming but it's regrettable that he'll be here for such a short time — a third of the time that his predecessors were here, and neglecting the main body of Christianity in the Holy Land, which is in the Galilee," said Rabbi David Rosen, head of interfaith relations at the American Jewish Committee.

Nevertheless, he said he expected Catholic-Jewish relations would continue to flourish under Francis, following the same path begun by his predecessors.