For Super Bowl foodies, New Jersey offers a mash-up of delicacies. Those fortunate enough to have tickets to the game at MetLife Stadium will be able to gorge on American, Mexican, Asian and Italian specialties, done with a local flair, in the "Home Food Advantage" food court. 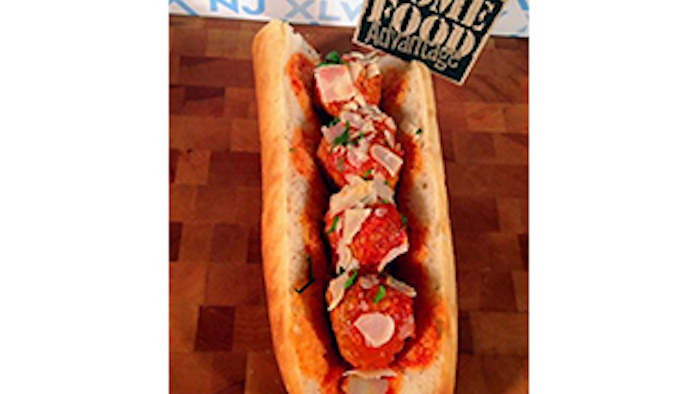 Nonna Fusco’s homemade meatballs are served at MetLife Stadium among an array of food options that will be available to Super Bowl fans when the big game is played there Feb. 2. The meatballs were inspired by stadium chef Eric Borgia’s grandmother. (AP Photo/Delaware North)

EAST RUTHERFORD, N.J. (AP) — Buffalo wings and chicken fingers, take a breather. Crab dip and curly fries, sit this one out. For Super Bowl foodies, New Jersey offers a mash-up of delicacies representing just about every culture on the planet.

Those fortunate enough to have tickets to the game at MetLife Stadium will be able to gorge on American, Mexican, Asian and Italian specialties, done with a local flair, in the "Home Food Advantage" food court. Club seat ticketholders will get an even more varied menu including sushi, sliced beef tenderloin and garlic shrimp with peppercorn demi-glace, blue crabcake with pickled baby bok choy and lemon aioli, to name a few of a host of offerings.

The food court dishes have local roots, such as Nonna Fusco's homemade meatballs, inspired by stadium chef Eric Borgia's grandmother (based on some diligent first-person research, they are the real deal).

For everyone else, a 20-minute drive in any direction from the stadium will land you in the middle of any of a number of ethnic enclaves brimming with culinary treats. And you won't even have to pay a bridge or tunnel toll.

Borgia, who worked as executive chef for baseball's San Diego Padres before coming to work for Delaware North Companies when the stadium opened in 2010, wanted to create a local-themed food court that brought to mind a New York/New Jersey street fair, minus the funnel cakes and $1.99 three-packs of tube socks. Ideas came during several days of food touring around the area, Borgia said.

"We drove around to food trucks and little holes-in-the-wall where people eat lunch," he said. "We wanted to do street food, but we wanted to make sure it was authentic."

Located on the ground floor of the stadium, it is a street you'll wish you lived on. It's comfort food gone rogue, starting with a stand where you can score a linebacker-sized grilled cheese sandwich featuring two varieties of New York State cheddar pinned between thick slices of Texas toast. Add a slab of bacon on a stick dipped in jalapeno-infused maple syrup and make sure your cardiologist is on speed dial. Next door, Lucky's serves Asian dishes, including noodle soup and pork-and-chicken steamed buns with pickled slaw and Sriracha aioli.

For meat lovers, there's Liberty Sausage and its "kitchen sink" sandwich, combining grilled chicken sausage and hot dog with potatoes, peppers and sauce, or a pork sausage sandwich with fresh spinach and roasted garlic. Nonna's, in addition to its heavenly meatballs, serves pasta and antipasti and is adding a roast pork and broccoli raab sandwich for the Super Bowl. Tacos Raqueros' burritos and tacos should provide enough heat to take your mind off the fact that it is February and you are outside.

Trying to sum up the multitude of food options in the surrounding area is like trying to analyze "Hamlet" in a tweet, but here goes:

The best Cuban sandwiches can be found on almost any corner in Union City, outside the Lincoln Tunnel and overlooking the Hudson River. A few miles north along the river is Mitsuwa Marketplace in Edgewater, billed as the largest Japanese supermarket in the country. Head back up and over the hill and you're in Palisades Park, where Korean food reigns. Nothing warms better than curry, and Jersey City's Newark Avenue, in the Journal Square area, is chock-full of Indian restaurants. In downtown Jersey City, don't miss Taqueria, one of the area's best taco joints, as long as you don't mind the uber-hipster vibe.

Newark, which will host Super Bowl media day on Jan. 28, is home to the Ironbound neighborhood, known for its Portuguese and Spanish flavors and dishes of paella big enough to feed a 53-man roster. Newark also has Hobby's deli, and Calandra's Italian family bakery, both of which have attained well-deserved legendary status. Equally revered is Fiore's in Hoboken, where the fresh "mutz" (mozzarella) melts in your mouth and the friendly servers make what some consider the perfect sandwich. For cheaper eats and an authentic New Jersey experience, Libby's Lunch (Paterson) and Rutt's Hut (Clifton) are masters of that humble American staple, the hot dog.