Photo of the Day: A Taste of 3-D Printing

ChefJet Pro, the first commercial, kitchen-ready food printer, can print intricate sugar sculptures. It deposits sugar layer by layer in a tray, and then melts the parts intended for the sculpture with water so they solidify much like sugar in a bowl will harden with moisture. 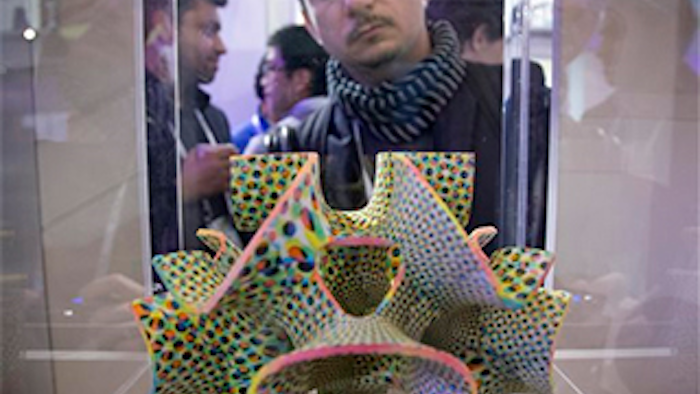 (AP) — A trade show attendee examines a centerpiece confection made with a ChefJet Pro 3D food printer on display at the International Consumer Electronics Show, Thursday, Jan. 9, 2014, in Las Vegas. The candies are made with sugar, food coloring and a single flavor. (AP Photo/Julie Jacobson)

LAS VEGAS (AP) — Some of the oddest items on display this week at the International CES gadget show were edible, origami-like sculptures made of sugar, their shapes so convoluted as to baffle the eye.

The treats are one of many signs that we'll all be getting a taste of 3-D printing soon —and the phenomenon won't be relegated to the realm of engineers and tech enthusiasts.

The sugar sculptures are the output of the ChefJet Pro, the first commercial, kitchen-ready food printer. It looks like an oven, and deposits sugar layer by layer in a tray, then melts the parts intended for the sculpture with water so they solidify much like sugar in a bowl will harden with moisture.

Ink can be selectively added to the water so the sculptures come out in full color — a feature sure to set the minds of wedding and party planners spinning. Next to the geometric sculptures was a wedding cake supported by a delicate lattice-work tower of sugar that would be nearly impossible to make by conventional means.

Oh, and the printer can print in chocolate too.

3D Systems Inc., a Rock Hill, South Carolina, company, expects to sell the full-color printer for about $100,000 in the latter half of this year, and a monochrome version for half that price.

Last year, there were only a handful of 3-D printing companies at the gadget show. This year, there were thirty, and the organizers had to turn others away because they couldn't fit them in. The 3-D printing area of the show floor drew dense crowds that gawked at the printers and their creations, which ranged from toys to tea cups to iPhone cases.