In the coldest weather, the recipe for safer roads goes beyond the usual sprinkling of salt. In Milwaukee, road crews are experimenting with cheese brine, a leftover from cheese making. New York and Pennsylvania are trying sugar beet juice, while molasses and potato juice are flavoring roads elsewhere. 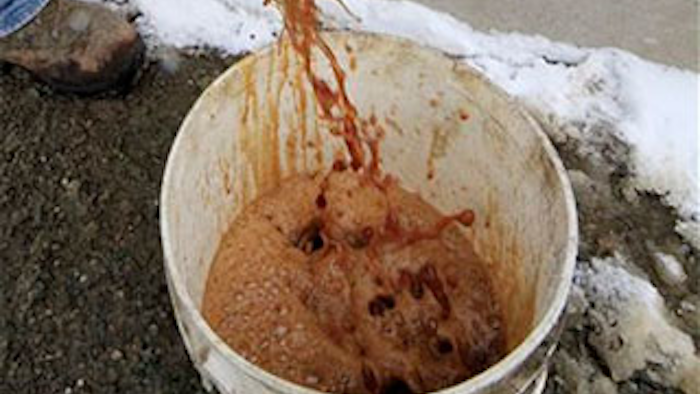 In a demonstration, a bucket is filled with beet juice at the Pennsylvania Department of Transportation's Butler, Pa., maintenance facility, Monday, Jan. 6, 2014.

Because rock salt is largely ineffective below 16 degrees, road salt is mixed with additives, such as beet juice and cheese brine, to keep it working in temperatures as low as minus 25. (AP Photo/Gene J. Puskar)

BUFFALO, N.Y. (AP) — A splash of beet juice, a dollop of molasses, a squeeze of cheese brine. In the coldest weather, the recipe for safer roads often goes beyond the usual sprinkling of salt.

Across the nation's snow belt, transportation officials are in the market for cheap and environmentally friendly ways to make rock salt work better by keeping it on the roads longer and melting ice at lower temperatures.

Plain salt is largely ineffective below 16 degrees. Additives can keep it working in temperatures as low as minus 25.

"This winter, it's been a godsend to be able to do that," said Leland Smithson, the ice and snow expert at the American Association of State Highway and Transportation Officials. "It's been so cold."

In Milwaukee, road crews are experimenting with plentiful cheese brine, a leftover from cheese making. New York and Pennsylvania are among states trying sugar beet juice, while molasses and potato juice are flavoring roads elsewhere.

"It's all about availability," said association spokesman Tony Dorsey. "States are using whatever they can find that works, especially in low temperatures."

Many of the food derivatives are in commercially marketed products with names such as Ice Bite and Magic Salt, but in Milwaukee, transportation officials are mixing their own brew. As part of a pilot program, the city's fleet operations manager, Jeffrey Tews, has sent trucks to some of Wisconsin's 140 cheese plants to pick up brine, which is used to pre-wet the roads and rock salt. (Mozzarella and provolone have the best salt content.)

City officials are looking at whether the brine, free except for transportation costs, can replace the 70-cents-a-gallon liquid calcium chloride now used as a pre-treater and melting enhancer. In addition to wetting the salt, making it stay on the roads better, the brine is believed to lower the temperature at which the salt works.

The brine's got a bit of a cheesy smell up close, Tews says, but in the few times it's been used, no one has complained.

"We're taking a product that normally would have been disposed of and repurposing it," Tews said. "It could be economical. It's too soon to project."

Used to pre-treat both the road and salt, the mixture of 80 percent brine and 20 percent beet juice also keeps the salt from scattering as much. That reduces by about 30 percent the amount of salt needed, officials said, which in turn cuts corrosion on vehicles, roads and vegetation.

This winter, crews plan to use 100,000 gallons of the beet-brine mixture on the 570-mile Thruway system. And officials promise the brownish mixture (no, it's not beet red) won't stain the roads.

"Molasses or beet juice, these materials are all very thick and they allow the liquid brine to stick to the salt without activating the salt," said Rob English, president of Chemical Solutions Inc. of Franklin, Mass., which produces ice melting products including molasses-containing Magic Salt.

Smithson said additives have been used for about 10 years and predicted more on the horizon as chemists experiment with whatever is available.

Wastewater from hydraulic fracturing, technology used to drill for natural gas using high volumes of fluid, is among substances being looked at, he said, though it's not believed to be in use anywhere.