At the crossroads that marks the center of the three-century-old New England postcard town of Newton, Conn., stands a flagpole that's a kind of barometer. In the wake of the tragic elementary school shooting, the community is banding together, with area restaurants and other businesses lending a helping hand. 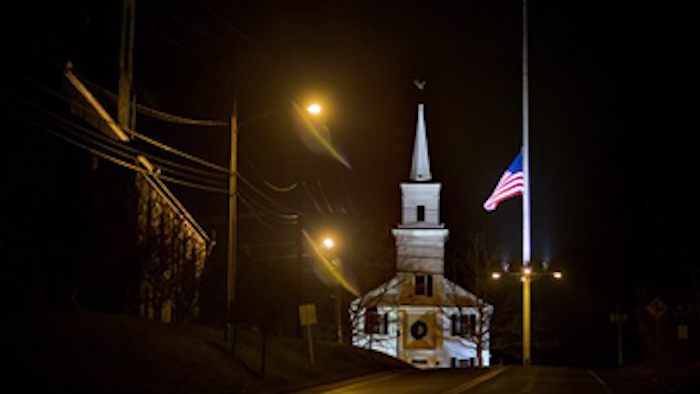 NEWTOWN, Conn. (AP) — At the crossroads that marks the center of this three-century-old New England postcard town stands a flagpole that's a kind of barometer. Every day, says Susan Osborne White, who has lived here all her life, "it tells me which way the wind is blowing" — and she calls the local newspaper whenever the flag is lowered to half-staff, to ask why.

No one is asking that now as the flag forlonly hangs over a heartbroken, uncomprehending town.

Along streets where every window twinkles with holiday candles, police sirens wailed Friday. Over horse pastures in what was until fairly recently a rural town, helicopters' rotors thudded. In shops, televisions set to news stations blared.

Gesturing at a TV image of the shooting scene behind him at Newtown Hardware, Kyle Watts gave a pained cry, "I know that place," and shook his head. He's 18 and had gone to Sandy Hook Elementary School, and yet he and others working at the store felt they hardly knew where they were.

"A week or two ago," he said in disbelief, "we had the Christmas tree lighting. There was singing."

In normal times, this is a place that marks the year with a community tree lighting, an endless Labor Day parade running past the Main Street flagpole in which it's said everyone is either a participant or spectator or both, and an annual fund-raising lobster dinner at one of the five volunteer fire companies. It's a place where a benefactress, Mary Hawley, donated the classically designed town hall and the large, re-brick library, both set among towering oaks and maples. On a lake in town, part of one of the Spencer Tracy-Katharine Hepburn comedies was filmed.

It's become a bedroom community for commuters to Manhattan and Connecticut's more toney coastal towns, but it has retained the rural character that was set in 1708 when the colonial assembly of Connecticut permitted 36 men to lay out a new town. Some houses today date from not long after that, but there are typical modern subdivisions, too.

"It's still very much a small town in its heart. People really know each other," said Dan Cruson, the town's historian who has written a number of books about Newtown.

Sandy Hook is a section of town where the first grist mill was built along the rocky, rushing Pootatuck River. Other mills followed, and manufacturing grew in Sandy Hook. "It's always had its own identity," Cruson said, and in recent years it has been revitalized with smart restaurants and shops in Sandy Hook's center.

Every year, the local Lions Club raises thousands of dollars with a charity event along the river: Thousands of numbered yellow rubber ducks are sold for $5 each, then dumped in the swift current for a "race," the winner of which might get a big screen TV or a weekend in Manhattan 60 miles away.

In the crowd watching and cheering and at events like the fire department's lobster dinner, "everyone knows everyone. All of Sandy Hook is so tight," said Watts.

Maybe the school shooter was recognized when he entered and didn't seem a threat because he was known, he and others at the hardware store speculated. "You would never think ..." he said, leaving the thought incomplete.

The closeness has another dimension, of course.

"Everybody in town is going to help out. ... All of the churches are open tonight," said his co-worker Francis Oggeri, who's 22.

Scudder Smith agreed. "I was just down at the firehouse. Restaurants were sending in food," said Smith, publisher of the Newtown Bee, the weekly paper that has published since 1877.

He said Newtown is "getting bigger than the little country town that I grew up in. I've been here 77 years.... But it still has the feeling between neighbors that it always had."

The Bee had closed this week's edition — with front-page reports on the schools "performing at or above target," on vandalism at a cemetery, and other stories — when the first word of the shooting came in.

"We've been putting everything on our website. We were the first ones down there," Smith said. "We've had calls from Turkey, all over Europe."

A police scanner alerted the newsroom, and reporter Shannon Hicks said, "I listened long enough to figure out where this was unfolding and headed out." Her photo of terrified children being led across a school parking lot appeared around the world.

Asked about the town, Hicks said, "It's a good town. We have our issues" — squabbling over the local budget, police news and the like — "but this is not the kind of thing that's supposed to be one of them."

Standing by the cluttered antique wooden desk of the publisher, she looked down sadly. "I've already heard comparisons to Columbine," she said.

Folks here want to tell about the town that was here for 300 years before Friday's attack.

At the Bee, they mention how Halloween brings out so many children to Main Street houses — one was made into a "princess castle" this year, another for years had a three-story web and giant spider in front — that the paper has used clickers and counted more than 2,000 kids some years.

They mention the homely, simple things that might counter the horror.

"We have two garden clubs, and they get along, they don't hate each other," said Susan White, who checks the flagpole every day.

She laughed but then grew more serious, mentioning that her father was on the school board that authorized the building of the Sandy Hook school. "That was my school," she said.

Telling about an award her mother recently received for work on a 75-year-old scholarship fund in town, she said of the ceremony, "It was a Norman Rockwell moment."

And was this a Norman Rockwell town?

"We've got our ups and downs, but we're a very real town. 'Norman Rockwell' sounds like we're perfect ... but we're not very different from any other town," she said.

And now, she added, "People will stick together. They have to."