HANGZHOU, China (AP) — Mostly unnoticed amid the political brawl over climate change, America has undergone a quiet transformation in how and where it gets its energy during Barack Obama's presidency, slicing the nation's output of polluting gases that are warming Earth. As politicians tangled in... 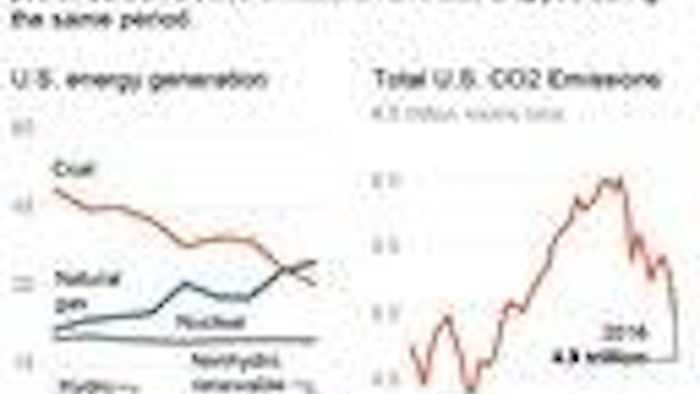 HANGZHOU, China (AP) — Mostly unnoticed amid the political brawl over climate change, America has undergone a quiet transformation in how and where it gets its energy during Barack Obama's presidency, slicing the nation's output of polluting gases that are warming Earth.

As politicians tangled in the United States and on the world stage, the U.S. slowly but surely moved away from emissions-spewing coal and toward cleaner fuels like natural gas, nuclear, wind and solar. The shift has put the U.S. closer to achieving the goal Obama set to cut emissions by more than a quarter over the next 15 years, but experts say it is nowhere near enough to prevent the worst effects of global warming.

The overlooked changes took center stage Saturday in China. Obama and Chinese President Xi Jinping entered the world's two worst polluters into a historic agreement to ratchet down heat-trapping pollution. Obama hailed "the investments that we made to allow for incredible innovation in clean energy."

U.S. Department of Energy statistics show jolts in where America gets its volts:

— In 2008, 48 percent of America's electricity came from coal, the dirtiest power source; now it's about 30 percent. That's less than the combined U.S. output of carbon-free nuclear and renewable energy.

— There are now more than three solar power jobs in the U.S. for every job mining coal.

— In 2008, the U.S. imported about two-thirds of its oil, and politicians spoke longingly of energy independence. Now, America imports less than half its oil.

— U.S. emissions of carbon dioxide — the main greenhouse gas — are down more than 10 percent, and this year is on pace to be the lowest in about a quarter-century.

"There were gigantic changes happening in the energy world, gigantic tectonic changes," said Peter Fox-Penner of the Boston University Institute for Sustainable Energy. "It's a sea change. There is no question."

Facing steep obstacles in Congress, Obama never aggressively pursued new emissions-curbing legislation, aside from a half-hearted attempt at cap-and-trade in his first term that was politically disastrous for Democrats. Instead, he relied on executive authority and regulations at home while largely going above lawmakers' heads by focusing on brokering global deals to curb carbon and other greenhouse gases.

So how much credit does Obama deserve? And how much was completely outside his control? That debate is playing out in Obama's final months in office, as the president tries to go out with a bang on climate and the environment.

Jack Gerard, president of the American Petroleum Institute, the oil and gas lobby, pointed out that Obama pitched his sweeping pollution limits on coal-fired power plants as the main driver of lower future emissions — but the courts have put those rules indefinitely on hold. Meanwhile, emissions have fallen due to a dramatic increase in cleaner-burning natural gas, which Obama was slow to try to regulate.

"We are leading the world in carbon reductions today, and it's driven primarily by cleaner-burning, affordable natural gas that was brought to you by innovation and technological advances in the oil and natural gas industry," Gerard said.

But Brian Deese, Obama's senior adviser, said the seeds of the fracking technology that enabled the natural gas revolution were found in federal Energy Department research conducted in the 1970s. He noted that the people who warned Obama's policies — like his "Clean Power Plan" emissions limits — would be disastrous are the same people now celebrating the natural gas revolution.

"You can't on the one hand argue that the Clean Power Plan is an overarching regulation that's going to impose all these costs, enforce all these changes in the industry, and on the other hand argue that change is happening independent of what government is doing and therefore these regulations are meaningless," Deese said in an interview.

The advent of fracking, or hydraulic fracturing, produced much more natural gas, which became much cheaper and elbowed out coal as America's fuel of choice. That has surprised all sorts of experts.

In 2000, Dana Fisher, director of the University of Maryland's Program for Society and the Environment, predicted the U.S. was unlikely to wean itself off coal because it was cheap and plentiful. And John Reilly of MIT's Joint Program on the Science and Policy of Global Change, predicted heat-trapping gas emissions would grow.

Both admit they were wrong, with an embarrassed Reilly calling the subsequent decline "a dramatic turnaround from what everyone has expected."

Obama had little to do with the fracking boom, except to not get in the way with regulations, energy experts said. But Obama pushed through 2009's stimulus package that goosed spending and research in renewables, like solar, wind and hydro. His administration also increased fuel mileage requirements for cars and trucks and ratcheted up appliance and building energy efficiency standards.

"His war is against fossil fuels, and natural gas is a fossil fuel," said Sen. Jim Inhofe, R-Okla., the Senate's most prominent climate change doubter. "You can't separate that out and say it's somehow different than other fossil fuels. It's not."

Natural gas is a "bridge fuel" from coal, which spews about twice as much heat-trapping carbon dioxide, but America still needs to wean itself from that fossil fuel too, said Granger Morgan, Carnegie Mellon University engineering and public policy professor.

And there are some downsides to these significant changes — like higher power bills in a few places — said Jeff Holmstead, a Bush-era environmental official who lobbies for utilities that depend on coal.

"It's a shame that we've shut down a lot of plants that were continuing to provide low-cost power," Holmstead said.

The change in America's energy supply is still too slow and pollution cuts are not enough to prevent dangerous global warming, Morgan said, adding "but it's certainly better than the alternative, which is continuing to sail on as if we weren't heading into the big storm."