RICHMOND, Vt. (AP) — Less than two years after Vermont almost quadrupled the amount of renewable electricity that homeowners and small businesses can sell to their utilities, regulators are looking for the best way to go even further to encourage renewable energy production while ensuring costs... 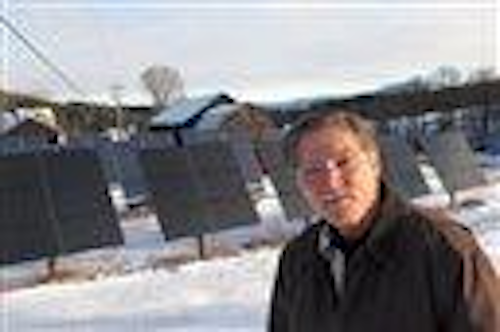 RICHMOND, Vt. (AP) — Less than two years after Vermont almost quadrupled the amount of renewable electricity that homeowners and small businesses can sell to their utilities, regulators are looking for the best way to go even further to encourage renewable energy production while ensuring costs stay low for everyone.

The question of how to cope with the growth in small solar projects while ensuring they don't increase costs to those who rely on traditional source of power is facing most every state. It's not so simple as just raising the cap on how much power utilities can buy from customers who have set up small generating projects; the amount they're reimbursed can't be so high that other customers see their rates skyrocket.

In Vermont, the cap is stopping new projects. Richmond businessman Jeff Forward thought he had a sure thing when he asked regulators for permission to install a 100-kilowatt solar array on the roof of a 44-unit condominium. It was only after he'd filed the application in November that he learned it was put on indefinite hold because the utility, Green Mountain Power, had hit the cap, a percentage of a utility's peak load.

"It was a shock," said Forward, chairman of the industry group Renewable Energy Vermont. "I freaked out entirely."

While Vermont's 15 percent cap, up from four percent in less than two years, is among the highest in the country, the utility regulating Public Service Board is considering new rules to enable more solar expansion. The board is now considering suggestions from utilities and others. The new rules are scheduled to take effect Jan. 1.

One key rule that will be examined is the reimbursement rate for customers.

In most cases people with small solar projects on their roofs, or those who join together to build small solar projects in fields, have their electric bills reduced by the amount they produce and they are paid by the utility for any extra power they send to the grid. It's a process called net metering.

The challenge is that when customers sell their excess power back to their utilities they're paid more than the utility charges regular customers. For example, Vermont's Green Mountain Power, which put Forward's project on hold, pays 19 or 20 cents per kilowatt hour depending on the size to residential solar projects while they charge their regular residential customers 14.7 cents.

The issue has been serious in Nevada, where the state Public Utilities Commission created a new pricing structure for net metering customers that took effect Jan. 1, which phases in higher costs for people who sell excess energy to their utility. After an uproar from solar users and layoffs at solar companies the commission is now expected to consider whether to allow older customers to keep their original rates.

"The current policy is clearly not sustainable," said Christine Hallquist, the CEO of the Vermont Electric Cooperative which serves about 32,000 mostly rural members across the northern part of the state and has hit the 15 percent cap and isn't taking new solar projects. "The idea of paying above market (prices) continues to pile those costs upon those remaining folks who don't have net metering. If you don't create the right price it's just going to continue to raise the price for others."

GMP has already asked for permission to keep accepting small residential projects above the cap before the board's new rules take effect.

"We believe in partnering with customers to create a brand new energy future as we continue to deliver reliable, cost-effective and low carbon power," said GMP spokeswoman Kristin Carlson.