Reactor in Japan Being Loaded With Nuke Fuel Before Restart

A Japanese utility on Tuesday began loading fuel into a nuclear reactor where operations are scheduled to resume next month in the country's first restart under safety requirements set following the Fukushima disaster. 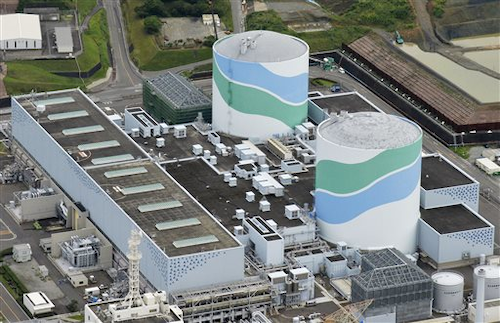 TOKYO (AP) — A Japanese utility on Tuesday began loading fuel into a nuclear reactor where operations are scheduled to resume next month in the country's first restart under safety requirements set following the Fukushima disaster.

Kyushu Electric Power Co. said the first four fuel bundles were loaded into the Sendai plant's No. 1 reactor as of late Tuesday. A crane slowly lifts each bundle out of a cooling fuel storage pool and places it into the reactor, in a round- the-clock operation. The utility plans to finish loading all 157 fuel bundles Friday ahead of final inspections before restarting the reactor around Aug. 10.

All of Japan's more than 40 reactors are offline for repairs or safety checks. Sendai No. 1 is one of 25 reactors seeking restarts and under safety inspection, as Prime Minister Shinzo Abe's government wants to operate as many of them as possible to meet the nation's energy needs and grow the economy.

Regulators affirmed the safety of two Sendai reactors last September under the stricter safety rules set after a powerful 2011 earthquake and tsunami destroyed the Fukushima Dai-ichi nuclear plant in northeastern Japan. The second reactor in Sendai is scheduled to be restarted in October.

While the trade ministry and local municipalities have approved the restart of the two reactors in southern Japan, many residents oppose the plan, citing potential danger from active volcanos in the region. Opponents of the restarts and nuclear experts are also concerned the evacuation plans in case of a disaster may not work effectively.

Experts also are concerned about possible glitches at a reactor that has not been used for more than four years.