Installed in 2010, two majestic, wind turbines now are a distinct part of the Bacardi landscape – and the environmental consciousness – at the world's largest premium rum distillery in Catano, Puerto Rico, just outside San Juan. 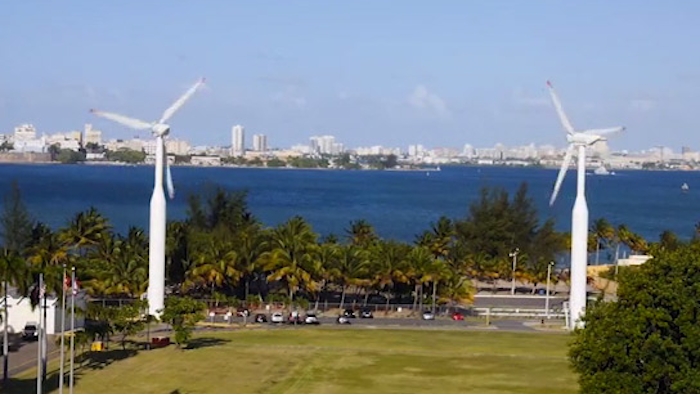 HAMILTON, Bermuda - Installed in 2010, two majestic, wind turbines now are a distinct part of the Bacardi landscape – and the environmental consciousness – at the world's largest premium rum distillery in Catano, Puerto Rico, just outside San Juan.

The wind turbines generate approximately 1,000,000 kWh of electricity per year, providing three to seven percent of the power for Bacardi in Puerto Rico. To put these numbers into perspective, that's enough electricity to run all tourism-related activities at the Casa BACARDI Visitor Center – equivalent to the energy that 100 households would consume on an annual basis. All of the power generated by the wind turbines is used onsite at the facility, resulting in an average carbon offset of more than 900 tons of CO2 per year.

Every day, hundreds of sightseers stop by to enjoy great BACARDI cocktails, learn about the Company's history and revolutionary rum production – and get a taste of its commitment to the environment.

The two Bacardi wind turbines can be seen from miles away and are industrial scale at 250kW each. They are owned by Catano-based Aspenall Energies, which will sell the wind-produced electricity to Bacardi under a power-purchase agreement. With their blades, the turbines stand 137 feet high and have a rotor diameter of 75 feet.

The wind turbines also set inspiration into motion for Bacardi employees – and an entire island community. "We have a fairly good wind resource and a wonderful solar resource. As long as we're using these natural resources, we stabilize the cost of energy, we can also have a cleaner mix to create less pollution on our island," saysRaoul Slavin, Managing Director of Aspenall Energies.

The model project also has widespread community and governmental support. Now, wind power is catching on with other businesses in Puerto Rico, an island working to reduce its reliance on fossil fuels. "Wind energy is no longer an unknown thanks largely to this project with Bacardi," adds Slavin. "It's something the Puerto Rican community feels very comfortable with."

"As we mark this week's Global Wind Day, we recognize the extraordinary potential of wind power," says Dave Howson, Bacardi Global Sustainability Director. "At Bacardi, we take pride that our Company is generating energy from a clean and renewable source."

Since 2006, when the Company began tracking its global impacts on the environment, Bacardi has reduced energy use by 25 percent, supported by a 48 percent decrease in greenhouse gas emissions from BACARDI rum production. Building on current programs and efficiencies that reduce water and energy use and greenhouse gas emissions, the Bacardi Limited "Good Spirited" global sustainability program sets specific goals in three areas:

To learn more about Bacardi Limited and its "Good Spirited: Building a Sustainable Future" environmental initiative for sourcing, packaging and operational efficiencies across the entire Bacardi family of premium spirits brands, visit http://www.bacardilimited.com/good-spirited.