Tiny Plants As The Future Of Nuclear Energy

Small underground nuclear power plants that could be cheaper to build than their behemoth counterparts may herald the future for an energy industry under intense scrutiny since the Fukushima disaster, according to the incoming head of the Nuclear Energy Agency. 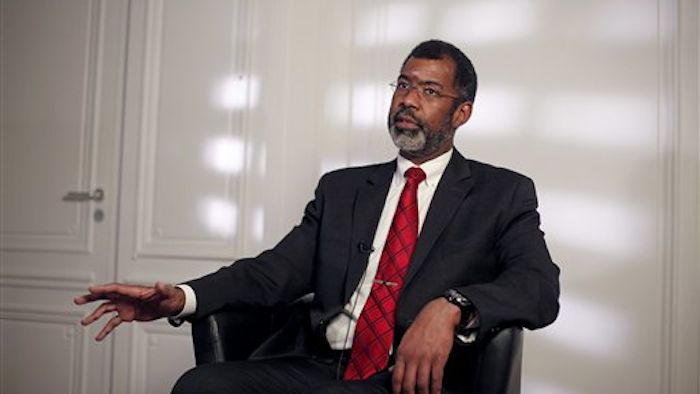 PARIS (AP) — Small underground nuclear power plants that could be cheaper to build than their behemoth counterparts may herald the future for an energy industry under intense scrutiny since the Fukushima disaster, the incoming head of the Nuclear Energy Agency told The Associated Press.

Size is relative — the modular plants could be about as big as a couple of semi-trailers — easily fitting on the dimensions of coal plants they're ultimately intended to replace in the U.S. They would have factory-built parts that are slotted together like Lego blocks and hauled by train or truck — making assembly possible anywhere.

William Magwood, the incoming director of the Paris-based forum for nuclear energy countries, said the U.S. has a window in the second half of 2014 for the first contract to build one of the small, modular nuclear reactors, a key test to learn whether they can exist beyond the theoretical.

The Energy Department has sunk $450 million into a multi-year effort to persuade companies that the technology can be developed profitably, but companies have been drifting away from the project, citing funding and regulatory questions. It would be at least another six years before one could be built.

"Anything with nuclear takes a while, and that's appropriate when you're talking about a technology that has to be built correctly," Magwood said in an interview ahead of his formal introduction this week to his new post. "We haven't built one, so we don't know whether they're going to be financially successful."

Microsoft founder Bill Gates has offered enthusiastic support — and investment funds — for similar micro-nuclear technology he believes can provide affordable electricity to the world's poor and help combat climate change. But one of the most promising developers in the Energy Department effort, Babcock & Wilcox Co., this week announced plans to scale back spending, citing the need for "significant additional investors."

And safety fears could cause even communities hungry for new sources of power to hesitate, just three years after the meltdown at Japan's Fukushima Dai-ichi plant. In the United States, the untested technology is competing with a shale gas boom that upended the market.

A full-size reactor costs $6 billion to $8 billion and takes years to build — and decades to recoup the costs. It can produce enough to power more than 700,000 American homes, more than 10 times the output of its smaller counterpart.

"A small reactor ... can be built for a fraction of that cost," Magwood said, describing the costs as being in the tens of millions. "Also these plants potentially would have some safety characteristics that would make them viable near population centers."

Gates is a major investor in the reactor development firm TerraPower, which is among a handful of U.S. companies still in the game for the small plants as well as versions that could, in theory, fit handily inside a shipping container. Those plans would have the reactors essentially consume their own waste. For now, the Department of Energy's mock-up indicates that the fuel is sealed into discrete building blocks which are then removed when it is spent.

"If you could make nuclear really, really safe, and deal with the economics, deal with waste, then it becomes the nirvana you want: a cheaper solution with very little CO2 emissions," Gates told Rolling Stone magazine in an interview last month.

But the essence of the technology is there already, since the modular reactors would mimic the ones that power U.S. nuclear subs, without the high-grade uranium.

Japan's nuclear plants have been closed since the March 11, 2011, earthquake and tsunami damaged the Fukushima Dai-ichi plant, causing meltdowns in three reactors. The disaster forced the evacuation of 100,000 residents in a 20-kilometer (12-mile) zone around the plant and prompted governments worldwide to rethinknuclear energy.

In the months that followed, Germany announced that it would phase out nuclear power by 2022 and construction plans were abandoned in several countries, including Italy, Malaysia and the Philippines.

The idea of reactors spread out throughout a country— even smaller ones — strikes fear in the hearts of critics.

After Fukushima, disaster plans that took years to put together were scrutinized with new urgency, leading to the realization that even neighboring countries might have very different ideas of what constitutes an emergency.

"A similar accident in Europe would involve several countries, and we are currently in a situation where our decision-making criteria are not the same, in terms of sheltering the population, evacuating, distributing iodine pills," said Pierre-Franck Chevet, president of France's Nuclear Safety Authority.

It's for that reason that Robert Rosner, a physicist at the University of Chicago's Energy Policy Institute, cautioned against seeing the new technology as the solution for the developing world. Rosner said the units are safer because they're protected underground against both internal accidents and external attacks, but the effects of nuclear meltdown are both far-ranging and long-lasting.

"The people that operate them have to know what they're doing and they have to mean it. They can't be complacent about safety and security," Rosner said.

France's nuclear plants produce about three-quarters of its energy needs, more than any country in the world. Chevet said the country, which has 58 full-sized reactors, has no current plans to build modular version domestically. Nuclear engineering firm Areva and government-owned utility EDF have cautiously joined a development consortium, but Areva said the "market remains very limited" — largely because development costs and regulatory hurdles leave the question of profitability unanswered.

And that may point to one of the problems in turning theory into reality: Countries most able to make the investment have less incentive to do so. Both France and the U.S. are likely to extend the life of their aging plants to 60 or even 80 years.

"The fact that they are old doesn't necessarily mean that they are not safe," said Magwood, whose new post falls under the Organization for Economic Co-operation and Development. "The analogy I often use is it's kind of like a car. You can replace many of the components in a car to keep it operating as long as you want."