Get The Scoop On Obama's Emission Rules

The Obama administration is poised to unveil the first rules limiting carbon emissions from the thousands of power plants across the nation. The pollution controls form the cornerstone of President Barack Obama's campaign to combat climate change and a key element of his legacy. 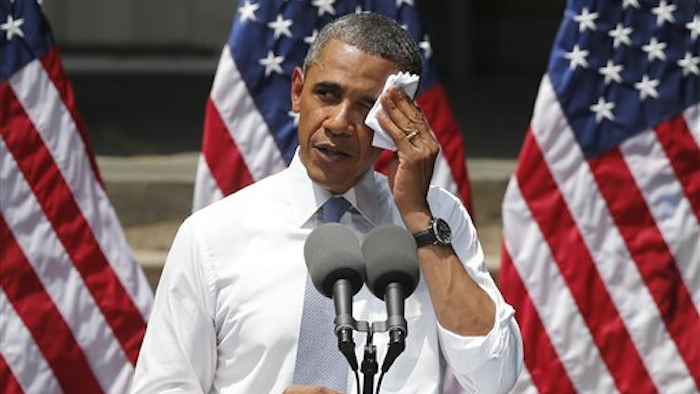 WASHINGTON (AP) — The Obama administration is poised to unveil the first rules limiting carbon emissions from the thousands of power plants across the nation. The pollution controls form the cornerstone of President Barack Obama's campaign to combat climate change and a key element of his legacy.

Obama says the rules are essential to curb the heat-trapping greenhouse gases blamed for global warming. Critics contend the rules will kill jobs, drive up electricity prices and shutter plants across the country.

Environmentalists and industry advocates alike are eagerly awaiting the specifics, which the Environmental Protection Agency will make public for the first time on Monday and Obama will champion from the White House.

While the details remain murky, the administration says the rules will play a major role in achieving the pledge Obama made in Copenhagen during his first year in office to cut America's carbon emissions by about 17 percent by 2020.

Some questions and answers about the proposal:

Q: How does the government plan to limit emissions?

Unable to persuade Congress to act on climate change, Obama is turning to the Clean Air Act. The 1970s-era law has long been used to regulate pollutants like soot, mercury and lead but has only recently been applied to greenhouse gases.

Q: Why are these rules necessary?

Power plants are the single largest source of greenhouse gas emissions in the U.S. Environmentalists and the White House say without bold action, climate change will intensify and endanger the public's well-being around the world. In its National Climate Assessment this year, the administration said warming and erratic weather will become increasingly disruptive unless curtailed.

"This is not some distant problem of the future. This is a problem that is affecting Americans right now," Obama said earlier this month.

Of course, the United States is only one player in the global climate game. These rules won't touch carbon emissions in other nations whose coal plants are even dirtier. But the White House believes that leading by example gives the U.S. more leverage to pressure other countries to reduce their own emissions.

Q: How steep will the reductions be?

We don't know. The administration hasn't said whether it will set one universal standard or apply different standards in each state.

But the administration has signaled it plans to give states as much flexibility as possible to meet the standards. That could include offsetting emissions by increasing the use of solar and nuclear power, switching to cleaner-burning fuels like natural gas or creating efficiency programs that reduce energy demand. States might also pursue an emissions-trading plan — also known as cap-and-trade — as several northeast states have already done.

Q: How will they affect my power bill? What about the economy?

It depends where you live. Different states have a different mixes of coal versus gas and other fuels, so the rules will affect some states more than others. Dozens of coal-burning plants have already announced they plan to close.

Still, it's a good bet the rules will drive up electricity prices. The U.S. relies on coal for 40 percent of its electricity, and the Energy Department predicts retail power prices will rise this year because of environmental regulations, economic forces and other factors.

Environmentalists argue that some of those costs are offset by decreased health care costs and other indirect benefits. They also say the transition toward greener fuels could create jobs.

Not for this. A 2007 Supreme Court ruling gave the EPA the green light to regulate carbon-dioxide under the Clean Air Act. But that doesn't mean there won't be fierce opposition and drawn-out litigation. The government is expecting legal challenges to the rules and is preparing to defend them in court if necessary.

Q: Is this the final step?

Not even close. After the draft rule is proposed Monday, there's a full year for public comment and revisions. Then states have another year to submit their implementation plans for EPA to review. States that refuse will have a plan forced upon them by the EPA.

An explosion occurred just after midnight Thursday, when 40 people were working.
Apr 9th, 2021
Follow Us
Most Recent