Closing The Largest Coal Plant In The West

The largest coal-fired power plant in the West will produce one-third less energy by 2020 and is on track to cease operations in 2044 under a proposal that the federal government adopted to cut haze-causing emissions of nitrogen oxide at places like the Grand Canyon. 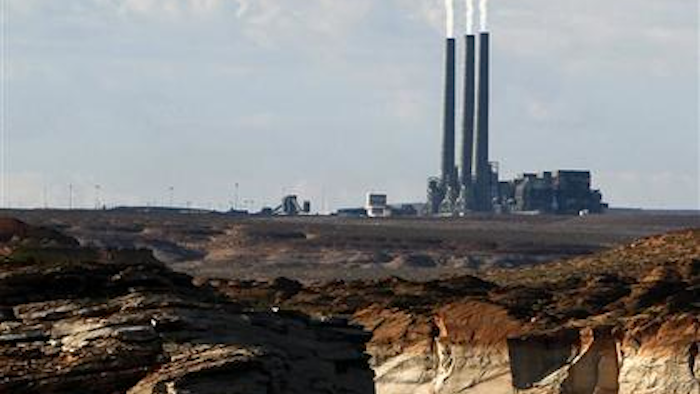 FLAGSTAFF, Ariz. (AP) — The largest coal-fired power plant in the West will produce one-third less energy by 2020 and is on track to cease operations in 2044 under a proposal that the federal government adopted to cut haze-causing emissions of nitrogen oxide at places like the Grand Canyon.

The U.S. Environmental Protection Agency announced Monday that the owners of the Navajo Generating Station could either shut down one of the plant's 750-megawatt units or reduce power generation by an equal amount by 2020. The owners would have until 2030 to install pollution controls that would cut nitrogen-oxide emissions by 80 percent.

EPA regional administrator Jared Blumenfeld in San Francisco said a final decision didn't come easily and required flexibility. Along with meeting energy demands in the West, the 2,250-megawatt plant powers a series of canals that deliver water to Phoenix and Tucson, fuels the economies of the Navajo and Hopi Tribes, and helps fulfill American Indian water-rights settlements with the federal government.

"This is so complex and integrated into the fabric of Arizona," Blumenfeld said.

The final rule comes five years after the EPA gave notice that it was considering pollution controls for the plant. The agency later released a proposal that would have required the upgrades by 2023.

A group made up of the plant's operator, tribal and federal officials, a canal system known as the Central Arizona Project and environmental groups said they could do better and came up with their own proposal, which was adopted by the EPA.

Reducing power generation by one-third should come easily because the Los Angeles Department of Water and Power and NV Energy have announced their intention to cut ties with the coal plant by 2019. Together, they own almost one-third of the plant near Page, run by the Salt River Project, one of Arizona's largest utility companies. None of the other owners would lose any power generation as a result.

"On the whole, while we're increasing our costs associated with the plant, the plant itself is still valuable enough to our customers and Arizona for us to continue," Salt River Project spokesman Scott Harelson said.

Conservation groups not part of drafting the alternative proposal had urged the EPA to reject it. They said that the best choice EPA could make was to require the plant's owners to install selective catalytic reduction — similar to catalytic converters on an automobile — by 2018.

The EPA received about 77,000 comments on the alternative proposal.

The final rule means the Navajo Nation ultimately will see less revenue from coal that feeds the power plant. But the executive director of the tribe's Environmental Protection Agency, Stephen Etsitty, said it provides a better chance of the power plant continuing operations.

"Of course it's not perfect," he said. "It's an indication that EPA is really open to the recommendations of local stakeholders. To me, that's a good move in the right direction."

Steve Michel of the environmental group Western Resource Advocates said he would have liked to see faster action to improve air quality. But the group agreed to participate in drafting the alternative proposal because it felt a better outcome would be achieved through negotiation, Michel said.

He's looking forward to the rule having a positive impact on air quality at the Grand Canyon and other pristine areas in the West.

"You need these kinds of national programs because they can look at this comprehensively, rather than one facility at a time," he said. "If we do this across the West, it will have a meaningful benefit."

The EPA's rule goes into effect 60 days after it's published in the federal register, which is expected to happen within two to three weeks.