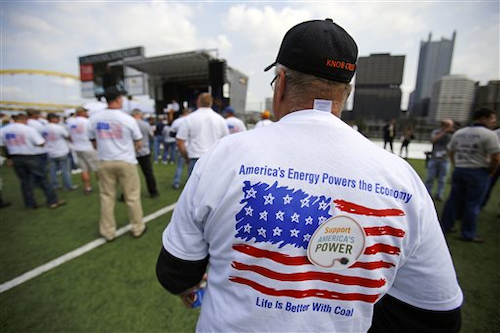 The rally came a day before the Environmental Protection Agency holds public hearings in downtown Pittsburgh. It says its proposed regulations will cut carbon pollution 30 percent by the year 2030. Hearings were held in Atlanta, Denver and Washington on Tuesday and Wednesday.

"We don't have the technology today to be able to burn the coal they way that they're proposing," said Tomblin, a Democrat. "We're just simply asking that they back off, work with the states, so that we can come to a compromise, so we can keep you coal miners working, so we can keep this country working."

Corbett, governor of the fourth-largest coal-producing state in the country, argued that "clean coal" technologies already developed by energy companies should be given a chance to further cut pollution.

"What are we supposed to do? Abandon it?" Corbett said of clean coal. "I don't think so."

Organized by the Pennsylvania Coal Alliance, the American Coalition for Clean Coal Electricity and the National Miners Association, the rally drew employees of companies such as Consol Energy and rank-and-file miners, steamfitters and boilermakers who contend the new regulations will shut down coal-fired plants and cost them jobs.

Most of the workers wore T-shirts with pro-coal messages, including "Stop the war on coal," or a variation of the "Got milk?" slogan: "Got electricity?"

Corbett said the Pennsylvania Department of Environmental Protection will testify about the state's plan to cut emissions without cutting jobs or making electricity less reliable. Pennsylvania gets 40 percent of its electricity from coal and Corbett told reporters before the rally, "This is about are we going to have enough electricity in Pennsylvania with these regulations."

Some environmentalists want even stricter rules than the EPA is proposing and argue that the benefits to the environment — and a boom they predict in jobs relating to more renewable, efficient energy sources — make the regulations a no-brainer.

Frances Beinecke, president of the Natural Resources Defense Council, told reporters this week that the regulations will "release innovation and clean up the air." She predicted emerging clean-energy businesses will pump up to $93 billion into the nation's economy each year and create over 275,000 efficiency-related jobs.

But the governors said the regulations are already killing energy-related jobs.

Taylor, who also serves as director of Ohio's Department of Insurance, said the Obama administration promised that the Affordable Care Act would be "flexible" and meet states' individual needs just like the EPA is saying the new pollution regulation will.