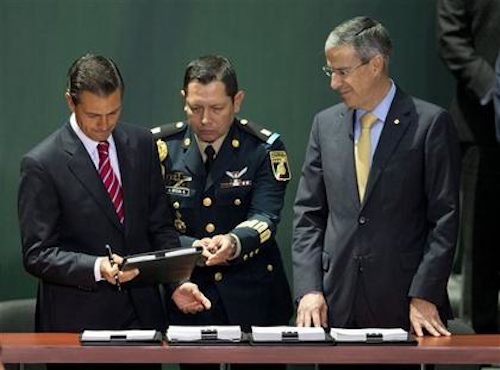 Pena Nieto said that the government will let potential investors know by Wednesday which blocks of gas and oil fields will be open for them. The state-owned oil company, Petroleos Mexicanos, or Pemex, has the right under the new rules to take first dibs and set aside some fields for itself; Pena Nieto said those set-asides will also be made public Wednesday. The president also promised to start putting in place regulatory and oversight agencies to implement the new rules by the end of August.

Government control of the oil industry began with the 1938 nationalization of foreign oil companies, and has long been a touchstone of Mexican nationalism. Energy Secretary Pedro Joaquin Coldwell acknowledged the new reforms have changed that.

"Today marks a watershed ... a change in the energy paradigm," Coldwell said at the signing ceremony at Mexico's National Palace, where beloved late president Lazaro Cardenas announced the expropriation 76 years ago. "It is a change in the way we relate our national identity to energy, to bring it up to date with realities of the 21st century."

Those realities include a constant decline in oil and gas production in recent years, as Pemex proved unable to open up significant deep-water or shale-gas production, both areas where the government hopes private firms will bring in expertise and tens of billions in investment.

The reforms open up production- and profit-sharing contracts for private companies that had been restricted to operating just as subcontractors for Pemex, without the ability to book reserves or gain a significant share in profits.

With drilling companies busy around the world, the first partial openings in the late 2000s proved unattractive. It's unclear how much interest there will be in the new round of bidding, which is expected to open in early 2015.

While the reforms passed by ample margins in Congress, due to support from Pena Nieto's Institutional revolutionary Party, the PRI, and the conservative National Action Party, many Mexicans still seem wary of the changes.

Seeking to reach average Mexicans, Pena Nieto promised they would feel the effects of the reforms in their pocketbooks, through lower power prices and more jobs.

Pena Nieto said that by passing he reforms "we have overcome decades of immobility, and overturned barriers that prevented Mexico from growing." One of those barriers has been the high price of gas — much of it imported — and electricity rates that are higher than in many parts of the United States.

"With this reform we can extract oil from deep waters and take better advantage of our vast deposits of shale gas, to generate electricity at lower prices," Pena Nieto said.

It remains to be seen whether Mexico can assign complex contracts to private companies without the kind of kickbacks, favoritism and insider deals seen in the past. The law creates a national oil commission to take such decisions out of the hands of Pemex.

Mexico's oil and gas production peaked in 2004 at 3.4 million barrels a day. It has fallen steadily since to the current 2.5 million barrels. With the reform, the government hopes to increase that to 3 million barrels by 2018 and 3.5 million by 2025, by attracting private companies with the expertise and technology to exploit the country's vast shale and deep-water reserves.