29 Rescued, 5 Still Buried After Mine Collapse

One by one, rescue workers pulled 29 miners out of a trouble-plagued coal mine Friday after it had collapsed a day earlier in central Bosnia. Five men remained buried deep underground as officials halted rescue efforts. 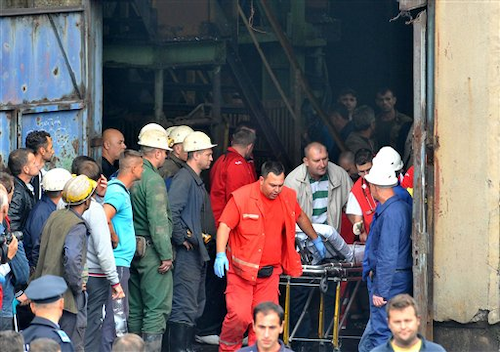 ZENICA, Bosnia-Herzegovina (AP) — One by one, rescue workers pulled 29 miners out of a trouble-plagued coal mine Friday after it had collapsed a day earlier in central Bosnia. Five men remained buried deep underground as officials halted rescue efforts.

Their faces smeared with coal dust and lined with worry and exhaustion, the men emerged from the Zenica mine to cries of joy from their families after spending the night trapped more than 500 meters (1,600 feet) below the ground.

"He is alive!" Admira Durakovic, whose husband Amir was among the miners, cried out before breaking down, sobbing and shaking.

The men looked tired and shaky but were not seriously injured.

Esad Civic, manager of the Zenica mine, said Friday the rescue effort had been halted after the 29 miners were pulled out. Rescuers say they have not been able to reach the remaining five men.

Alija Celebic, himself a retired miner, waited for his son Bego, among the 29 who escaped.

"He was hurt in the mine just two weeks ago, and now this!" Celebic said. "All is good as long as he is alive!"

The union leader at the coal mine, Mehmed Oruc, said two tunnels in the mine collapsed Thursday evening following a gas explosion triggered by a minor earthquake that had hit near the town of Zenica.

He said 22 other miners managed to get out of the pit Thursday after the tunnels collapsed, two of whom were injured.

It was the third incident at the Zenica coal mine this year. A total of 16 miners were hurt in two previous gasexplosions, the most recent less than four weeks ago. The mine is also the site of one of the greatest mining tragedies in Bosnia's history, when 39 miners were killed in a gas explosion in 1982.

Families and union leaders accused the management of responding poorly to the latest collapse, particularly in initially claiming that only eight workers were trapped inside the pit. Union leaders said authorities only brought in rescue machinery seven hours after the blast.

Mine manager Civic, however, insisted that "mine accidents cannot be avoided."

Still, he conceded that the Zenica mine — once among the most modern in Europe — is now far from the world standard, following Bosnia's 1992-95 war that impoverished the country.

Muris Tutnjic, one of the miners who escaped Thursday, came to the site Friday to show his support. He said the underground blast "just blew us away."