Coal companies announced an agreement Thursday to consolidate ownership of a Montana mine in a deal aimed at boosting exports of the fuel to Asia through ports on the U.S. West Coast. 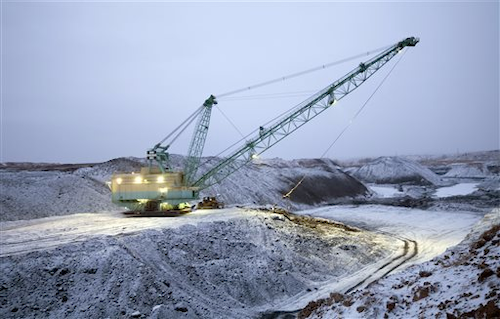 BILLINGS, Montana (AP) — Coal companies announced an agreement Thursday to consolidate ownership of a Montana mine in a deal aimed at boosting exports of the fuel to Asia through ports on the U.S. West Coast.

Under terms of the deal, Wyoming-based Cloud Peak Energy would sell its 50 percent stake in the 120-worker Decker Mine to co-owner Ambre Energy of Australia.

In turn, Ambre would assume liability for $67 million in reclamation and lease bonds for the mine. Cloud Peak also gains the option to move almost 8 million tons of coal annually through a port proposed by Ambre in Longview, Washington.

The deal is expected to close later this year.

Ambre, Cloud Peak and other companies want to increase coal shipments to Asia as domestic demand falters. But proposals for new export terminals in Washington and Oregon have run into strong resistance from regulators and environmentalists.

A deal on the Decker mine has been in the works since 2012. Negotiations hit a roadblock last year when Ambre could not come up with sufficient financing to cover the reclamation and lease bonds.

An early version of the deal had Ambre also paying Cloud Peak $64 million in cash. That payment was dropped in the final agreement, according to Ambre spokeswoman Liz Fuller.

Fuller declined to explain the change. But it suggests Ambre was able to negotiate a significant discount for a mine with production costs up to five times greater than those of some competing mines, according to court documents filed by Cloud Peak in a 2012 dispute with Ambre over how the mine was being run.

Cloud Peak President Colin Marshall said in a statement Thursday that the deal with Ambre positions both companies to meet future growth in Asian markets for so-called thermal coal that is burned to generate electricity.

"As well as building new port infrastructure, Ambre will now also be able to guarantee the supply of high-quality U.S. coal to customers in Korea, Japan and the Asia Pacific region from its own mining operations," King said.

Regulators last month rejected a proposal for a second Ambre-backed coal port along the Columbia River in Oregon. The Oregon Department of State Lands said the terminal would interfere with a longstanding fishery in the state's waters.

Ambre spokeswoman Liz Fuller said an appeal of the rejection is likely.

In 2011, Ambre bought 50 percent stakes in Decker and a second mine, Wyoming's Black Butte, which it owns with Anadarko Petroleum. But a year later, Decker laid off 59 employees — more than one-third of its workforce.

The number of workers has since rebounded somewhat. Still, last year's 3.1 million tons of coal from Decker considerably lagged the roughly 10 million tons annually extracted from Decker in prior years.

Ambre racked up losses of more than $124 million from 2005 through 2012, according to the Sightline Institute, a Seattle-based environmental think tank.