Families and friends have buried five Bosnian miners whose bodies were recovered from a coal mine pit that collapsed last week when a 3.5-magnitude earthquake hit the central town of Zenica. 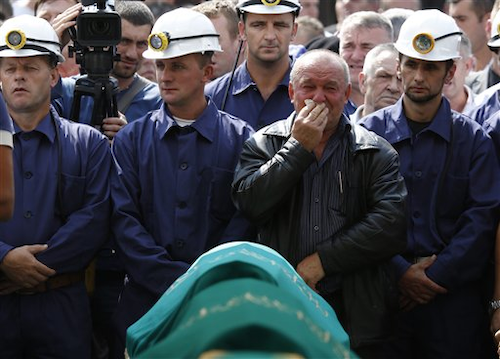 ZENICA, Bosnia-Herzegovina (AP) — Families and friends have buried five Bosnian miners whose bodies were recovered from a coal mine pit that collapsed last week when a 3.5-magnitude earthquake hit the central town of Zenica.

The earthquake caused a buildup of methane gas that led to an explosion, which collapsed the mine and trapped 34 miners about 500 meters (more than one-quarter mile) below the surface Thursday evening.

On Friday, 29 survivors were rescued but the bodies of the five victims were pulled out over the weekend. Thousands of people attended the funeral Monday.

It was the third incident at the Zenica pits this year, underscoring the vulnerability of the mines in Bosnia and elsewhere in the Balkans, which are generally poorly secured and where miners work with outdated equipment and little protection.