Crews worked for the fourth week to clean oil that leaked from a pipeline into a nature preserve near Cincinnati as officials began to focus on restoration of the affected area. 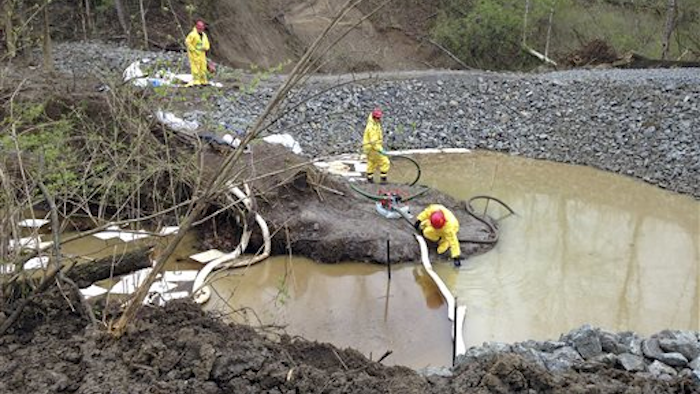 CINCINNATI (AP) — Crews worked Monday for the fourth week to clean oil that leaked from a pipeline into a nature preserve near Cincinnati as officials began to focus on restoration of the affected area.

Oil could be smelled and seen on soil and rocks along an intermittent stream where water levels change according to rain amounts, and an oil sheen remained in some water at the Oak Glen Nature Preserve as media toured the rain-drenched site for the first time since the leak was discovered in mid-March.

Federal officials estimate that more than 20,000 gallons — or about 500 barrels of crude — leaked from a 5-inch crack in the 20-inch-diameter pipeline that is part of the system running about 1,000 miles from Texas to Michigan. Federal officials with the Department of Transportation's Pipeline Hazardous Materials Safety Administration are investigating the cause. Authorities have said they are not sure when the leak started, though a resident has told officials he noticed a strong odor of oil in late February.

Sunoco Logistics, the pipeline's primary owner, is covering costs associated with the leak and has said crews will remain on site as long as necessary. The Philadelphia-based company hasn't released any costs of cleanup.

Officials with the Great Parks of Hamilton County, which owns the 374-acre preserve, estimate about 80 to 90 percent of the oil has been removed. Crews continue searching for lingering oil residue in water and soil and checking long, snakelike absorbent booms and small pads set up to capture oil from areas including the stream and a 1-acre marshy area that forms a pond.

While officials hope most of the remaining cleanup can be completed over the next few months, the long-term impact and time needed for restoration can't be determined. But parks officials say they already are making plans to substitute logs from any lost trees for erosion control and add oil-absorbing plants to the marshy area.

Because roads had to be widened a portion of the preserve's prairie was taken. In addition, the cleanup activity has disturbed the natural habitat of species, including two considered endangered in Ohio — the lark sparrow and the cave salamander. The sparrow isn't expected to show up at the park for nesting until June, and cave salamanders haven't yet emerged from underground for mating.

Officials are concerned about the effects on trees that control erosion. Henninger expects that a large sycamore tree, with its exposed roots contaminated by the oil, probably will die and others are at risk.

No impact on groundwater and air quality has been detected and no large animals have been found to be affected yet. But at least 31 small creatures— including crawfish, salamanders and frogs — have died, said Bob Mason, parks stewardship manager. About 149 have been collected to be cleaned of oil, with about 61 released into the wild in another area and more expected to be found dead.

The rain that fell Monday would have been a problem earlier but can actually help now that most of the oil has been removed.

"Nature has a better flushing system than we do," Mason said.

A few wildflowers sprouting up in the contaminated area were a hopeful sign even though officials acknowledge that years of long-term monitoring may be necessary.