Former Alaska Gov. Sarah Palin defended as fair and common sense the oil tax structure she championed while in office, a system that has been dismantled by state lawmakers and her successor, fellow Republican Sean Parnell. 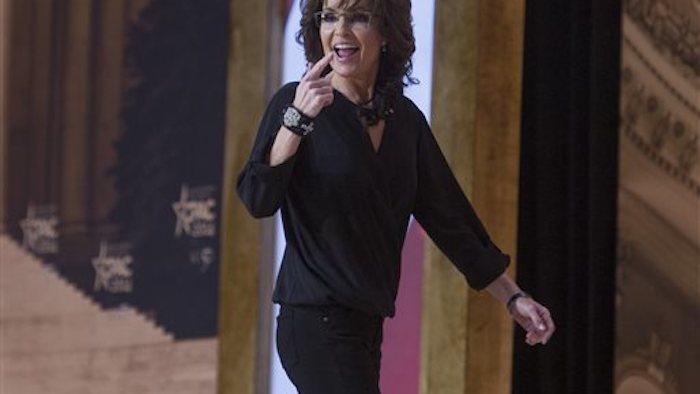 JUNEAU, Alaska (AP) — Former Alaska Gov. Sarah Palin defended as fair and common sense the oil tax structure she championed while in office, a system that has been dismantled by state lawmakers and her successor, fellow Republican Sean Parnell.

Palin also took a swipe at Parnell on Anchorage radio station KWHL when asked about Parnell's change in direction.

"Well, bless his heart. Remember that Sean Parnell came from the oil industry. He was, you know, an employee of ConocoPhillips ... lobbying for the cause there. So perhaps that's engrained in him," she said during her call-in appearance on the Bob and Mark show Wednesday.

Parnell, who was director of state government relations for ConocoPhillips in Alaska from 2000 to 2003, was Palin's lieutenant governor. He was elected with her in 2006 and took over for her as governor when she resigned during her first term in 2009.

While early on he supported the tax system she championed, known as Alaska's Clear and Equitable Share, or ACES, he began proposing efforts to change it as early as 2010, shortly after he was elected in his own right, as a way to help boost oil production. Ultimately, lawmakers last year approved an entirely new production tax system, though that system, which Parnell helped put in place, is the subject of a referendum that voters will decide in August.

Vic Fischer, a prominent Alaskan and leader of the effort to repeal the new tax system, said he's not sure how Palin's comments will resonate with Alaskans. But he said she's a "pretty feisty lady" whose comments brought attention to the repeal effort.

Oil taxes are a big deal in Alaska, since oil revenues are largely responsible for the funding of state government operations.

Critics of the new system, like Fischer, call it a giveaway with no guarantee of what Alaska will see in return.

But supporters say it's working, citing a flurry of industry-related activity and plans by the companies to commit billions of dollars in new investments. "Results matter," Parnell spokeswoman Sharon Leighow said by email. She said Alaskans have also benefited since the law's passage from more rigs on the North Slope and more than 1,000 new jobs at Point Thomson, a major oil and gas field that certain companies have an obligation to work to develop under a settlement with the state.

Leighow said the new tax system — which Parnell refers to as the More Alaska Production Act — "offers balance by protecting Alaskans when oil prices are low while still encouraging new investment when prices are high."

More than $8 million has already been raised by the industry-backed "Vote No on 1" group, which is working to defeat the referendum, according to financial disclosures.

"I'm happy to weigh in on this and for what it's worth give my little two cents and let people know how it works and let people know how wrongheaded this will be if we start caving in to those who we respect, we partner with, that's the oil companies," Palin said. She said the companies are "doing just fine and our constitution lays out that perfect blueprint for Alaska to be solvent and sovereign and that's with resource development that benefits owners, the residents."

The idea behind ACES, which was passed in 2007, was that the state would help companies on the front end with things like tax credits and share profits with them when oil flowed and prices were high. But companies complained that the progressive surcharge that was a feature of the system ate too deeply into profits, discouraging new investment. Even many supporters of ACES acknowledge there was a need for adjustments of some sort on the surcharge at the high end.

While Palin did not endorse a candidate, she said Walker has "his thumb on the pulse of, I think, most Alaskans who care about the future of this state, and don't want to see government grow. They want to see empowerment of the people," which she said includes job creation.

Walker said Thursday that he had not spoken with Palin and was surprised by her remarks.