ExxonMobil has donated $250,000 to aid recovery efforts in the state from last week's severe storms that included a deadly tornado. 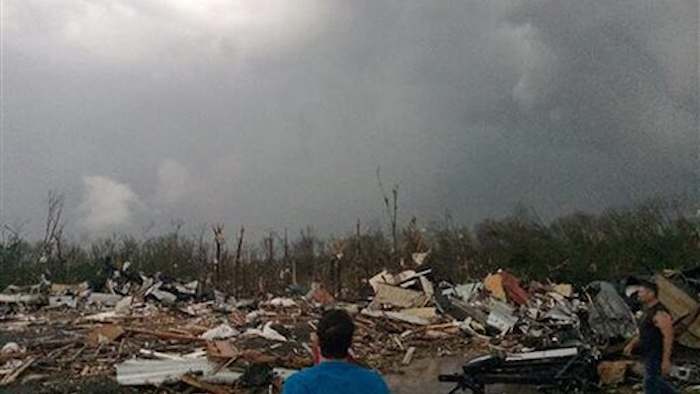 LITTLE ROCK, Ark. (AP) — ExxonMobil, the company responsible for a large oil spill that polluted a central Arkansas neighborhood, has donated $250,000 on Thursday to aid recovery efforts in the state from last week's severe storms that included a deadly tornado.

"ExxonMobil has a long history of helping communities in disaster relief, and we wanted to help here," the company's vice president of operations Karen Tyrone said. "I like the community. I like the people. And when we heard about the disaster, I wanted to bring any help that we could."

The oil business made a $125,000 donation to the American Red Cross's location in Little Rock, after Tyrone had toured the damage in Mayflower. The company also contributed $125,000 on Thursday to the Arkansas Community Foundation. More than 200,000 gallons of heavy crude spilled from the company's Pegasus pipeline beneath Mayflower last year.

Fifteen people were killed in the April 27th tornado that tore through central Arkansas communities, including Mayflower and Vilonia. A newborn's death has also been attributed to the storm, because of injuries the mother sustained from the twister. The National Weather Service rated the tornado as a "high-end" EF4, with winds near the top of the 166-200 mph range.

According to Brigette Williams — spokeswoman for the American Red Cross — the oil company's gift will help relief efforts in storm-damaged areas, including purchasing food and cleanup supplies. The organization has deployed 24 mobile units to several Arkansas counties affected by last week's severe storms, including Pulaski, Faulkner and White County. Half of the units are "food trucks" for storm victims and the other half serve as supply vehicles, carrying kits filled with materials needed for cleanup efforts, such as gloves, rakes, face masks and bug spray.

Williams said the organization learned earlier this week of the oil company's plan to donate the money, calling the gift a "nice surprise." The group also received a $250 donation this week from three Conway girls who raised the money from their lemonade stand.

"No gift is too small...no gift is too large," she said. "We're not a government agency and... we rely on gifts to keep us going."