China & Russia On The Verge Of A Gas Deal

China plans to sign a multibillion-dollar deal to buy Russian gas during a visit by President Vladimir Putin next week despite U.S. pressure to avoid undermining sanctions on Moscow over the Ukraine crisis. 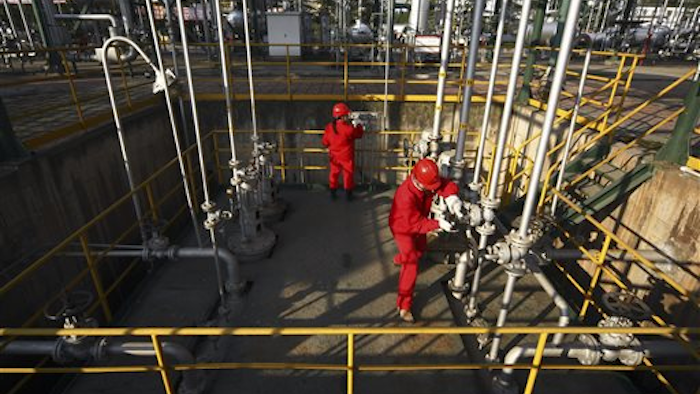 BEIJING (AP) — China plans to sign a multibillion-dollar deal to buy Russian gas during a visit by President Vladimir Putin next week despite U.S. pressure to avoid undermining sanctions on Moscow over the Ukraine crisis.

Washington has appealed to Beijing to avoid making business deals with Russia, though American officials acknowledge the pressing energy needs of China, the world's second-largest economy.

Negotiations that began more than a decade ago had stalled over price. But analysts say Moscow, isolated over its role in Ukraine, faces pressure to make concessions in exchange for an economic and political boost.

"We are still exchanging views with Moscow and we will try our best to ensure that this contract can be signed and witnessed by the two presidents during President Putin's visit to China," a deputy Chinese foreign minister, Cheng Guoping, told reporters on Thursday.

Putin's visit to China is also likely to highlight the diverging fortunes of the two powers. China is on track to overtake the U.S. as the world's biggest economy in the next decade and is increasingly assertive in political relations with its neighbors. Russia's economy is reeling from its dispute with the West over Ukraine's tilt toward the European Union, a shift that inflamed Moscow's insecurities about declining influence.

Putin is due to meet Chinese President Xi Jinping during a two-day conference on Asian security that starts Tuesday in Shanghai. Cheng noted they reached a preliminary agreement on gas sales when Xi attended the Winter Olympics in Sochi, Russia.

Companies from the two sides "have already reached an agreement on the majority of the contents of their cooperation," said Cheng. "The main difference between them still lingers on the price of natural gas."

Beijing has to weigh the economic benefits against possible strained ties with Washington and the European Union, but analysts say Chinese leaders are leaning toward a deal. China faces chronic gas shortages and talks on the proposed 30-year contract between Russia's government-controlled Gazprom and state-owned China National Petroleum Corp. began long before the Ukraine crisis. Chinese leaders are also eager to get Russian gas to help curb pollution by reducing reliance on coal.

A tentative agreement signed in March 2013 calls for Gazprom to deliver 38 billion cubic meters of gas per year beginning in 2018, with an option to increase that to 60 billion cubic meters. Plans call for building a pipeline to link China's northeast to a line that carries gas from western Siberia to the Pacific port of Vladivostok.

"It's not something that can be switched off because the U.S. is upset about a more recent development," said analyst Rachel Calvert of consultancy IHS.

Analysts Leslie Palti-Guzman and Emily Stromquist of Eurasia Group put the likelihood of a gas deal finally being concluded this month at 80 percent.

The deal would be an "important strategic gain" at a time when the Ukraine crisis is fraying Russia's political and economic tie with the West, they said in a report.

"We discussed, as we do with many nations, the impact our sanctions are having and the importance that they are not offset by others coming in," Lew said in a statement sent to reporters by his office.

China rejects the sanctions imposed by the United States and European Union on Russia during the Ukraine crisis.

"The U.S. side overemphasizes the use of sanctions," a deputy Chinese finance minister, Zhu Guangyao, said after Lew's meetings.

Washington and the EU have imposed asset freezes and visa bans on 61 people and several companies linked to Putin's inner circle in connection with the unrest in Ukraine.

The sanctions add to economic problems for Russia, which faces slowing growth and capital flight as companies and individuals pull money out of the country.

The Russian finance ministry said $51 billion flowed out of the country in the first quarter of the year. The president of the European Central Bank, Mario Draghi, last week cited estimates that as much as 160 billion euros ($220 billion) had left the country since the Ukraine crisis began. Ratings agency Standard & Poor's has cut its rating on Russian government debt to one notch above junk status.

Russia may make a "big concession" on the price it charges China, said Li Xin, a foreign affairs specialist at the Shanghai Institute of Foreign Studies. He said Moscow has been looking east for new customers while the sanctions encourage Europe to reduce reliance on Russian gas.

"Energy cooperation is a long-term strategy for both China and Russia," he said, "and it's not related at all to the Ukraine situation."