Marathon Petroleum will spend $2.87 billion to acquire the retail operations of Hess, the largest chain of company operated gas stations and convenience stores on the East Coast. 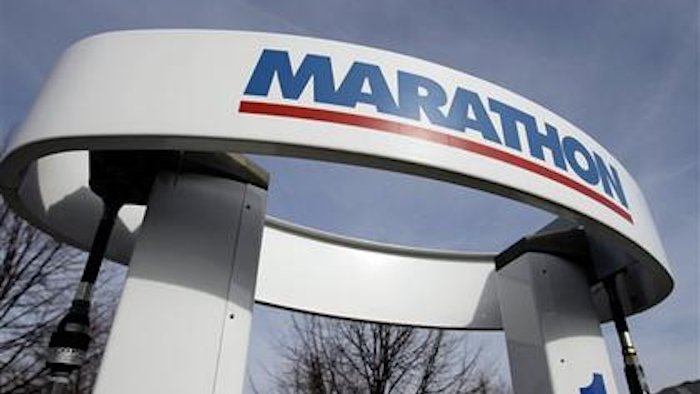 FINDLAY, Ohio (AP) — Marathon Petroleum will spend $2.87 billion to acquire the retail operations of Hess, the largest chain of company operated gas stations and convenience stores on the East Coast.

The deal, which is being orchestrated under subsidiary Speedway LLC, will expand Marathon's retail operations from nine states to 23 states along the coast and in the Southeast.

Hess Corp. has been reshaping itself as a pure production and exploration company since coming under pressure from hedge fund Elliott Capital Management in 2013. It said last year it would seek a buyer for its retail operations.

Hess will use proceeds from the sale for additional stock buybacks. The company boosted its existing share repurchase authorization to $6.5 billion from $4 billion.

The deal announced Thursday consists of $2.37 billion in cash, an estimated $230 million of working capital and $274 million of capital leases. The transaction includes all of Hess' retail locations, transport operations and shipper history on various pipelines, including approximately 40,000 barrels per day on Colonial Pipeline that runs from New York to Houston.

"With this significant geographic expansion, we will be able to further leverage our integrated refining and transportation logistics operations, providing an outlet for an incremental 200,000 (barrels per day) of assured sales from our refining system," Marathon Petroleum CEO Gary Heminger said.

Marathon Petroleum Corp. is itself part of an earlier split in the energy sector in 2012, when Marathon Oil Corp. broke off its refining division so that it could focus on exploration and production.

Hess on Thursday reassured customers that the holiday tradition of the Hess toy truck will continue. The company said that the toy trucks will be sold at Hess retail stores and online this year. Starting in 2015, Hess plans to sell the toy trucks online.

The acquisition is expected to close late in the third quarter.