For more than a decade, Denton has drawn its lifeblood from the huge gas reserves that lie beneath its streets. The gas fields have produced a billion dollars in mineral wealth and pumped more than $30 million into city bank accounts. But this former farming center north of Dallas is considering a revolt. 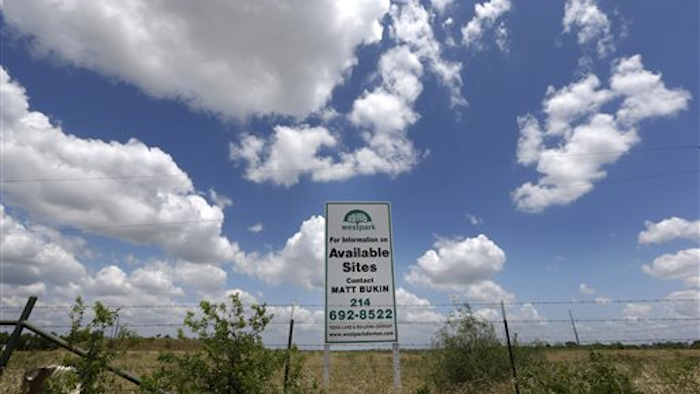 DENTON, Texas (AP) — Natural gas money has been good to this Texas city: It has new parks, a new golf course and miles of grassy soccer fields. The business district is getting a makeover, and the airport is bustling, too.

For more than a decade, Denton has drawn its lifeblood from the huge gas reserves that lie beneath its streets. The gas fields have produced a billion dollars in mineral wealth and pumped more than $30 million into city bank accounts.

But this former farming center north of Dallas is considering a revolt. Unlike other communities that have embraced the lucrative drilling boom made possible by hydraulic fracturing, leaders here have temporarily halted all fracking as they consider an ordinance that could make theirs the first city in the state to permanently ban the practice.

"I think the people of Denton really want to keep the livability of the town," said Taylor Schrang, a 28-year-old personal trainer. "And fracking is pretty obtrusive."

If the city council rejects the ban, it will go to voters in November.

The college town has preserved much of its agricultural past. Historic downtown streets lined with 19th-century buildings open up to expansive fields with greenhouses and grazing cattle. But drilling is never far away, with some 275 active gas wells piercing the earth.

The willingness to reject fracking in the heart of oil and gas country reflects a broader shift in thinking. In place of gas drills, some of Denton's 120,000 residents envision a future in which their city is known for environmentally friendly commerce and the nation's largest community garden. They've even embarked on a campaign to persuade the maker of Sriracha hot sauce to expand its massive pepper-grinding business here — a prospect that appeals to the local farm-to-table culture.

Fracking involves blasting a mix of water, sand and an assortment of chemicals deep into underground rock formations to free oil and gas. The method has long stirred concerns about its effect on air and water quality, and whether it releases cancer-causing chemicals and causes small earthquakes.

Around the time fracking began in Denton, in 2000, the population started to swell, along with doubts about the drilling. More graduates from the University of North Texas and from Texas Woman's University chose to stay in town and set up small businesses. Then simmering concerns over the proximity of new wells to residential areas came to a head in 2009, when nurse Cathy McMullen organized a 300-person protest against five wells planned in a meadow across from a city park.

At the same time, drillers defied city rules that required them to line wastewater pits and prohibited them from burning off, or "flaring," waste gas in residential areas.

"All that did was make people so fired up," McMullen said. "We had no choice" but to call for an outright ban, she said.

It also helped that only 2 percent of Denton's residents see royalties from the drilling, McMullen said, citing an analysis of city appraisal records on mineral property values between 2002 and 2013.

Scores of other cities and some states have considered similar bans, but few, if any, have Denton's close ties to the oil and gas industry. The issue could test whether any community in Texas — the nation's biggest oil and gas producer — can rebuff the industry and still thrive.

The debate comes as the city tries to wean its business community off fossil-fuel revenue. The Sriracha campaign is the highest-profile part of that effort. Another example is Tetra Points Fuels, which produces ethanol from expired soda and other sugary drinks that have been thrown away.

If the fracking ban is adopted, it's unclear whether the law would hold up in court. Cities in Colorado and California are being sued by drilling operators over similar bans, and owners of mineral rights here are already making their case for more drilling.

Land in Texas is split between the surface and the minerals below. In Denton, most of the mineral rights are held by estates and trusts outside Texas, according to a preliminary study by University of North Texas researchers who support the ban.

The Rayzor Co., which has one of the largest mineral holdings in Denton, stands to lose about $1.75 million a year if it's barred from fracking on its former cattle ranch. Chief executive Phillip Baker insists that fracking is the only process capable of retrieving gas from the mineral rights held by Rayzor and others.

Meanwhile, city councilman Kevin Roden has different hopes for the future. He launched the Sriracha campaign despite the company's problems in Irwindale, California, where residents complained about odors and fumes that burned their throats and eyes.

"There's a big distinction," Roden said he tells skeptics, "between the toxins emitted from oil and gas and the irritation that comes from chopping tons of onions and jalapenos.