A bill approved by the Legislature to adjust Oklahoma's tax on oil and gas production is unconstitutional because it passed in the final days of the session and didn't receive a three-fourths vote in the House and Senate, according to a lawsuit filed with the state Supreme Court. 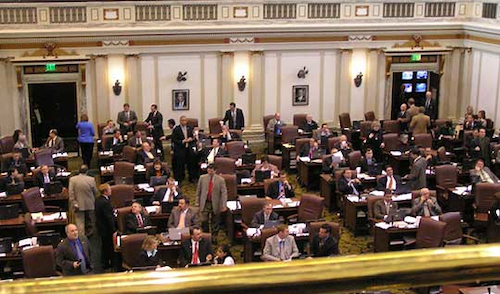 OKLAHOMA CITY (AP) — A bill approved by the Legislature to adjust Oklahoma's tax on oil and gas production is unconstitutional because it passed in the final days of the session and didn't receive a three-fourths vote in the House and Senate, according to a lawsuit filed Thursday with the state Supreme Court.

The lawsuit, filed by Oklahoma City attorney Jerry Fent, asks the state's highest court to throw out the bill, which was supported by the state's oil and gas industry.

"I do not take a position on whether it's a good tax or not a good tax," said Fent, who has successfully challenged numerous bills passed by the Legislature. "I go to the constitutional procedure: Is it constitutional and lawful?"

Fent maintains the bill also has an unconstitutional effective date of July 1.

Under the bill, all oil and natural gas wells would be taxed at a standard 2 percent rate for the first three years of production. After that, the rate would return to the standard production tax rate of 7 percent.

A decision in the case likely will hinge on whether the measure is a revenue bill, which the Oklahoma Constitution states cannot be passed during the last five days of the session and must receive a three-fourths vote in both chambers, among other things.

Oral arguments before a Supreme Court referee are scheduled for July 29.

"The purpose of HB 2562 was not to raise revenue, it was to provide certainty surrounding Oklahoma's incentives to drill new wells and increase production," Warmington said in a statement. "The measure was thoroughly vetted, and we believe it will withstand any challenges."

"We feel like the law is constitutional and it will be upheld," Fallin said.

The bill would apply the new 2 percent rate to all wells drilled after July 1, 2015. After three years at the incentivized rate of 2 percent, the tax would return to the standard tax rate of 7 percent. The length of the reduced rate is significant because wells produce considerably more oil and gas in the first few years of production.

Currently, horizontally drilled oil and gas wells, which now account for about 70 percent of all wells in Oklahoma, are taxed at 1 percent for the first four years of production, but that incentive is set to expire next year. If lawmakers took no action, the rate would return to 7 percent, which is the current rate for traditional vertical wells.

Industry officials argued that without the incentive, drilling companies could decide to leave Oklahoma and search for oil and gas in other states.