As of January 1, 2014, there were 139 operating refineries and three idle refineries with total atmospheric crude oil distillation capacity (ACDU) of 17.9 million barrels per calendar day (bbl/cd), a 101,000-bbl/cd increase in capacity from January 1, 2013. 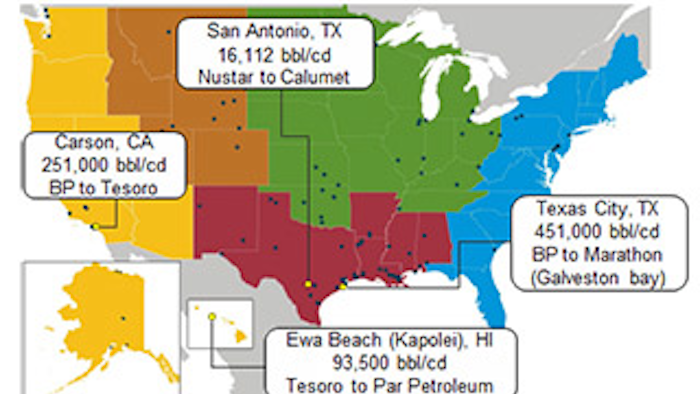 As of January 1, 2014, there were 139 operating refineries and three idle refineries with total atmospheric crude oil distillation capacity (ACDU) of 17.9 million barrels per calendar day (bbl/cd), a 101,000-bbl/cd increase in capacity from January 1, 2013. In 2013, four refineries changed ownership, continuing the trend of a handful of sales each year. This information is detailed in EIA's recently released Refinery Capacity Report, which surveys U.S. refinery ownership and capacity annually at the start of each year.

Exxon Mobil Corporation is second at almost 1.9 million bbl/cd. With the purchase of the Texas City refinery from BP, Marathon Petroleum Corporation became the third-largest refiner, with a capacity of 1.7 million bbl/cd. Marathon is calling the refinery Galveston Bay to distinguish it from the much smaller Texas City refinery Marathon had already owned. Phillips 66 fell to fourth-largest and Motiva remained fifth-largest. Combined, these five companies own 45% of total U.S. refining capacity. With its purchase of the Carson refinery, Tesoro became the largest refiner on the West Coast. The concentration of refinery ownership in other regions is mostly unchanged from last year. PBF Energy Corp and Marathon Petroleum still lead the East Coast and Midwest in refining capacity, respectively. Valero has the most capacity in the Gulf Coast region, and Suncor has the most capacity in the Rocky Mountains.