No Brine In The Bay

The snaking, nearly 2-mile trail of saltwater that an underground pipeline spewed in the rugged hills of western North Dakota's badlands left a 200-yard-long stretch of dead vegetation, a company official said, though she added there is no evidence yet that the spill has contaminated a nearby bay. 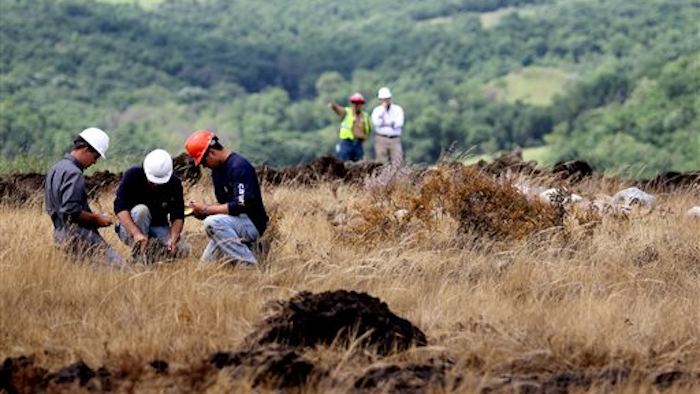 MANDAREE, N.D. (AP) — The snaking, nearly 2-mile trail of saltwater that an underground pipeline spewed in the rugged hills of western North Dakota's badlands left a 200-yard-long stretch of dead vegetation, a company official said, though she added there is no evidence yet that the spill has contaminated a nearby bay.

On Friday, officials were expected to continue investigating the extent of the damage and cause of the pipeline leak that spilled nearly 1 million gallons of saltwater, an unwanted byproduct of oil and gasproduction. Also called brine, saltwater is considered an environmental hazard by the state.

The path the saltwater took into a ravine left a patch of dead vegetation as wide as 100 feet in some points, said Miranda Jones, vice president of environmental safety and regulatory at Houston-based Crestwood Midstream Partners LP. The pipeline belonged to Crestwood subsidiary Arrow Pipeline LLC.

That ravine flows into Bear Den Bay, a tributary of Lake Sakakawea. Sakakawea, one of the nation's largest man-made lakes, is a drinking water source for the Fort Berthold Indian reservation.

On a boat trip to the bay Thursday, The Associated Press saw no visible signs of contamination. Waterfowl were present in the area — some sitting close to the bright yellow booms placed at the point where the ravine meets the bay. Booms had also been placed around a nearby water-intake system used by the reservation.

The company believes the spill began over the Fourth of July weekend. In the first public statement in the two days since the spill was detected, the Environmental Protection Agency said it had no confirmed reports that the saltwater had reached Bear Den Bay. The agency said most of the spill was pooled on the ground, soaked into the soil or held behind beaver dams.

Jones also said Thursday that there is no evidence the bay had been contaminated.

On Wednesday, Jones spoke to The Associated Press with Three Affiliated Tribes chairman Tex Hall, who said then that the spill had leaked into the bay. On Thursday, Jones said the chairman was referring to the ravine.

The area where the spill occurred is in a patch of North Dakota's badlands — a dramatic, remote and rugged landscape characterized by steep-sided hills dropping into ravines.

Claryca Mandan, natural resources administrator for the Mandan, Hidatsa and Arikara tribes' natural resources department, said the area is "one of the worst places it could have happened" as the geography complicates cleanup and remediation efforts.

Cleanup crews were carrying equipment into the bottom of the ravine by hand Thursday.

On top of the bluff where the spill occurred, workers could be observed shoveling contaminated earth and taking soil samples.

At the bottom of the ravine, Jones said, crews were removing contaminated water and using pipes to pump in fresh water.

The EPA said it was assessing the site to ensure none of the brine had affected Lake Sakakawea.

Crestwood agreed to take the AP and a local television station to view part of the affected area on Thursday, but with limitations on where and when photographs could be taken.

Fort Berthold Indian Reservation plays a key role in the state's oil production, the second-highest in the nation. The reservation currently represents more than 300,000 of North Dakota's 1 million barrels of oil produced daily, according to the state's Department of Mineral Resources.