The council governing a North Texas city that sits atop a large natural gas reserve rejected a bid early Wednesday that would have made it the first city in the state to ban further permitting of hydraulic fracturing in the community. 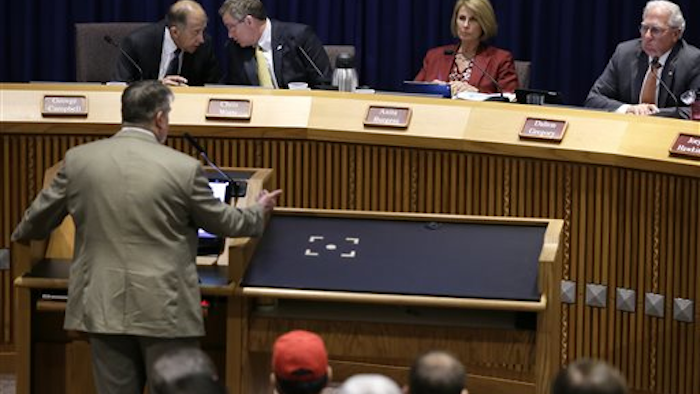 DENTON, Texas (AP) — The council governing a North Texas city that sits atop a large natural gas reserve rejected a bid early Wednesday that would have made it the first city in the state to ban further permitting of hydraulic fracturing in the community.

Denton City Council members voted down the petition 5-2 after eight hours of public testimony, sending the proposal to a public ballot in November.

Fracking involves blasting a mix of water, sand and chemicals deep into underground rock formations to release trapped oil and gas. While the method has long stirred concerns about its effects on the environment and human health, industry proponents argue that fracking can be done safely and is cleaner than other forms of energy extraction.

Industry groups and state regulators warned such a ban could be followed by litigation and a severe hit to Denton's economy.

An estimated 500 people turned out to Denton City Hall Tuesday, spilling over into satellite rooms and even a city building across the street. More than 100 people registered to speak during the hearing before the vote.

Petition supporters, including some who came to tears while addressing the council, said the risks to human health and the environment outweigh the economic benefits.

Denton sits on the Barnett Shale, which is believed to hold one of the largest natural gas reserves in the U.S.

City leaders introduced a temporary ban on new fracking permits in May after fracking-ban proponents delivered a petition containing about 2,000 signatures.

The temporary ban is set to expire in September.