Nothing spilled when three tanker cars in an oil train from North Dakota derailed at a rail yard, but it alarmed environmentalists. 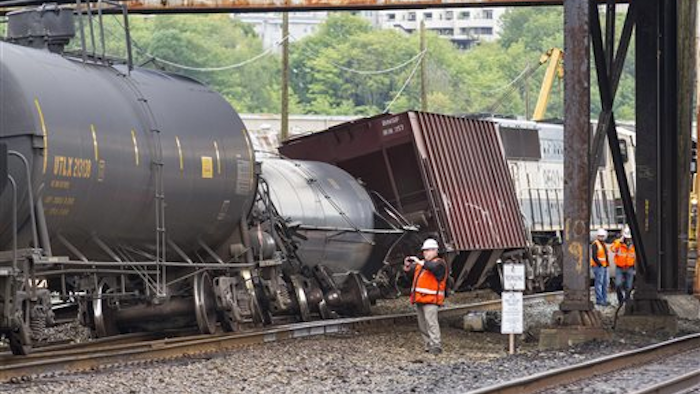 SEATTLE (AP) — Nothing spilled when three tanker cars in an oil train from North Dakota derailed at a rail yard early Thursday, but it alarmed environmentalists.

"This is a warning of how dangerous this could be," said Kerry McHugh, communications director for the Washington Environmental Council.

She noted the train derailed near Puget Sound, under Seattle's Magnolia Bridge, the main connection to one of the city's neighborhoods.

"The potential for environmental damage, economic damage and the disruption of people's lives is huge," she said.

The train with 100 tanker cars of Bakken crude oil was heading for a refinery at Anacortes and pulling out of the Interbay rail yard at 5 mph when five cars derailed, said Burlington Northern Santa Fe spokesman Gus Melonas (mel-OWN'-us).

They included one of the locomotives, a buffer car loaded with sand and three tankers. The locomotive, buffer car and one tanker remained upright. Two of the tankers tilted. One leaning at a 45-degree angle had to be pumped out and taken elsewhere for repairs, Melonas said.

No one was injured in the accident and a railroad hazardous material crew was on the scene in 5 minutes, he said.

The Seattle accident occurred on the same day the Corps of Engineers is holding a hearing in Seattle on a draft environmental statement for a pier that BP built at its Cherry Point refinery north of Bellingham to handle oil tankers and oil trains. Environmental groups planned a rally before the hearing.

"There's a lot of risk associated with oil trains and right now we're not prepared to deal with them," McHugh said.

Trains carrying Bakken oil from North Dakota have been supplying Washington refineries at Tacoma, Anacortes and near Bellingham. Oil train export terminals are proposed at Vancouver and Grays Harbor on the Washington coast.

More people became aware of oil train dangers when a runaway train exploded in 2013 in the Quebec town of Lac-Megantic, killing 47 people.

"The city of Seattle is deeply concerned about the threat to life, safety and the environment of potential spills and fires from the transport of petroleum by rail," the letter said.

The tankers involved in the Seattle accident hold about 27,000 gallons of oil and are a newer design with enhanced safeguards.

"The cars performed as designed," Melonas said. "There was no release of product."

It was the first incident in the state involving an oil train, he said.

"We have an outstanding safety record, and derailments have declined in Washington state over 50 percent on BNSF main lines in the past decade," he said.

"It was sheer luck that the cars, carrying 100 loads of Bakken crude oil, didn't spill or even catch fire. If that had occurred, the chances are there would have been tragic loss. If fire had occurred, the odds are it would have burned out of control for days and oil would have made its way into Puget Sound. People need to know that every time an oil train travels by this is the risk that is being taken," she said.

Trains continued to move through the area on other tracks.

Crews expect to have the derailment track repaired and reopened by midnight Thursday, Melonas said.

The Seattle Fire Department responded but left when it determined there was no spill, said spokesman Kyle Moore.