Opponents of expanding a natural gas pipeline through northwestern Massachusetts rallied on Boston Common on Wednesday, asking Gov. Deval Patrick to rescind his support for a new tax on New Englanders' electricity bills to help subsidize it. 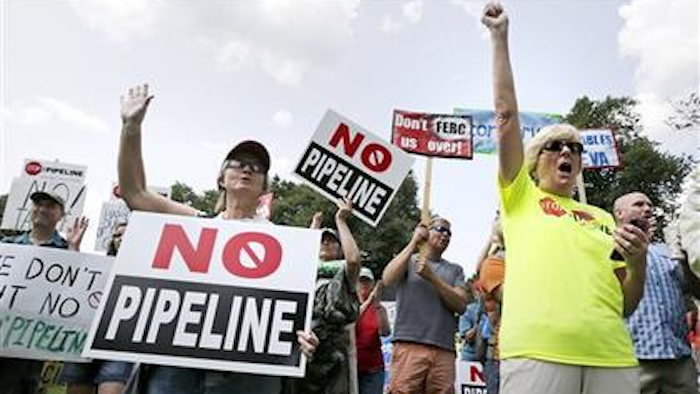 BOSTON (AP) — Opponents of expanding a natural gas pipeline through northwestern Massachusetts rallied on Boston Common on Wednesday, asking Gov. Deval Patrick to rescind his support for a new tax on New Englanders' electricity bills to help subsidize it.

The protest, attended by hundreds of supporters, was the culmination of a month-long "rolling rally" that marched through towns likely impacted by the proposed 250-mile long pipeline expansion in Berkshire, Worcester and Franklin counties.

Jim Cutler, an Ashfield resident, said the pipeline would potentially cut a 100-foot swath through his property, including a tree where his mother's ashes lay.

"All this for gas I do not want or do not need," he said.

Organizers, who later marched to the State House to deliver a petition to the governor, said the proposed electric ratepayer tax was "unprecedented" for natural gas projects.

They said the project would undo much of the good work Patrick, a two-term Democrat who is not seeking re-election, has accomplished in reducing the state's greenhouse gas emissions and promoting renewable energy industries.

"Is that the legacy you wish to leave behind? One step forward, two back?" asked Emily Norton, an activist from Townsend.

Gov. Patrick, who met with a small group of the protesters later Wednesday, said he remains skeptical about the Kinder Morgan project even as he remains generally open to new natural gas projects.

Other politicians also weighed in.

U.S. Sen. Elizabeth Warren said in a statement she opposed the current Kinder Morgan proposal, saying the state must upgrade its energy infrastructure in ways that are "consistent with Massachusetts' commitment to environmental conservation, clean energy, and energy efficiency."

U.S. Sen. Ed Markey also opposed the pipeline as proposed because it raises "serious questions," including whether it is too large for the state's energy needs and could result in the natural gas being exported rather than used locally. And Congressman James McGovern, a Worcester Democrat, said the proposed pipeline route was "irresponsible" because it cuts through environmentally-sensitive lands and local farms.

The Houston-based energy company is conducting land surveys and aims to file application materials with the Federal Energy Regulatory Commission starting in September, he said. "There will be considerable opportunity for public comment during the course of permitting," Wheatley said.

Kinder Morgan wants to extend its Tennessee Gas Pipeline, which stretches from the Gulf of Mexico to upstate New York, through the western and northern stretches of Massachusetts. The proposed extension would run from Wright, New York to Dracut, a town on the Massachusetts-New Hampshire border.

Opponents at Wednesday' rally focused on how they would personally be impacted.

Ben Clark, of Clarkdale Fruit Farms, said his family's nearly 100 year old farm in Deerfield would lose a minimum of 600 fruit trees under the plan.

"Our very way of life is being trampled," he said. "Our orchards will be ripped apart and our iconic hillside will be destroyed."