Colorado's Democratic governor urged those pushing dueling proposals on oil and gas drilling to stop their campaigns to avoid a messy ballot fight and called for a task force to deal with energy development. 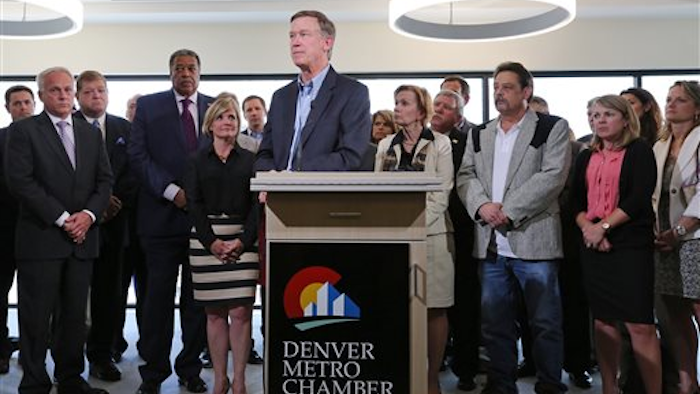 DENVER (AP) — Colorado's Democratic governor urged those pushing dueling proposals on oil and gas drilling to stop their campaigns to avoid a messy ballot fight and called for a task force to deal with energy development.

Democratic U.S. Rep. Jared Polis joined Gov. John Hickenlooper on Monday to detail what they're pitching as a compromise to prevent four initiatives that support or oppose fracking.

Polis has financially backed two of the measures seeking limits on drilling, including increasing the distance between homes and rigs. The governor says drilling restrictions would seriously hurt Colorado's economy.

It's unclear whether backers of the other two measures sympathetic to the industry will drop their proposals.

As a compromise, Hickenlooper said an 18-member task force would issue recommendations to Legislature next year on how to minimize conflicts between residents and the energy industry.