Little action has been taken to clean up pollution caused by oil production in Nigeria's Niger Delta region, either by the government or Shell Oil, Amnesty International and other groups charged Monday. 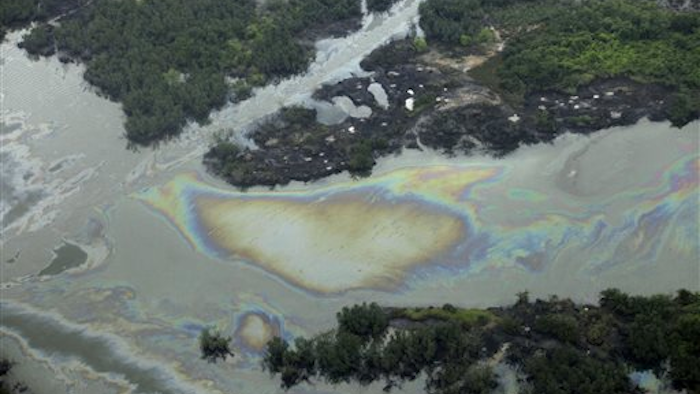 LAGOS, Nigeria (AP) — Little action has been taken to clean up pollution caused by oil production in Nigeria's Niger Delta region, either by the government or Shell Oil, Amnesty International and other groups charged Monday.

Oil production has contaminated the drinking water of at least 10 communities in the Ogoniland area but neither the Nigerian government nor Royal Dutch Shell's Nigeria subsidiary have taken effective measures to restore the fouled environment, said the new report by Amnesty International, Friends of The Earth Europe, Center for Environment, Human Rights and Development, Environmental Rights Action, and Platform.

The Nigerian National Petroleum Corp., the state-owned oil company, has not yet responded to a request by The Associated Press for reaction to the critical report.

A detailed assessment of pollution in the oil-producing area was published in 2011 by the United Nations Environment Program, which said it will probably take up to 30 years to fully clean the area.

"In the three years since UNEP's study was published, the government of Nigeria and Shell have taken almost no meaningful action to implement its recommendations," said the joint report.

Among those emergency measures, emergency water supplies were brought to communities affected by the pollution. But the communities say these supplies are "erratic," often insufficient and the water sometimes "smelled bad and was unpleasant to drink," said the groups' report.

In its earlier study UNEP gave several examples of contaminated water and land, including at Nisisioken Ogale, in western Ogoniland. "Families are drinking water from wells that is contaminated with benzene — a known carcinogen — at levels over 900 times above World Health Organization guidelines," said UNEP.

In July 2012 the government created the Hydrocarbon Pollution Restoration Project (HYPREP) to implement the UN recommendations. But as of July this year, "none of the NGOs monitoring UNEP implementation was aware of any action by HYPREP to meet this commitment," the groups said.

Oil production stopped in Ogoniland in 1993, but some of the equipment wasn't fully decommissioned, leaving it open to sabotage and corrosion, the U.N. report found. in January 2013 Shell requested approval from the government to decommission its assets in Ogoniland, and was granted an approval more than a year later, in February 2014, according to the report. "Shell's description of what has been achieved amounts to almost no action whatever," the groups said.

"The people of Ogoniland continue to suffer the effects of fifty years of an oil industry which has polluted their land, air and water," the groups said. "Only some of the emergency measures have been implemented — and then only partially."

The groups accused Shell of putting the blame on oil theft, rather than taking responsibility and acting on the findings of the UN report.

Nigeria, a member of the Organization of the Petroleum Exporting Countries, is Africa's largest oil producer and most populous nation. But several communities in the oil-producing Niger River delta say their areas are still underdeveloped, and their region has been polluted by oil spills, ruining their drinking water and their sources of livelihood including farming and fishing.

Oil companies say gangs that break into pipelines to steal crude oil are the main causes of oil spills in the region. Shell, the largest oil company operating in Nigeria, is now facing a lawsuit in the United Kingdom where the law firm Leigh Day, representing fishermen in the Niger Delta, is arguing the company isn't doing enough to maintain and protect its pipelines from being sabotaged by oil thieves. But Shell insists it's following international best practice in its operations in the West African country.