A Michigan jury on Thursday rejected two men's claims that Enbridge Inc. should compensate them for what they say are losses because of a 2010 oil pipeline spill into the Kalamazoo River system. 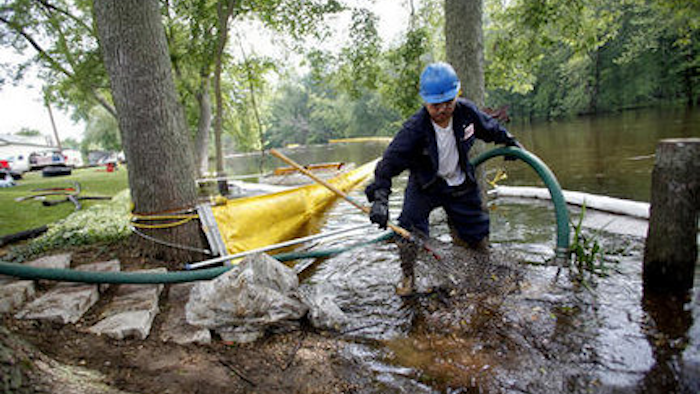 BATTLE CREEK, Mich. (AP) — A Michigan jury on Thursday rejected two men's claims that Enbridge Inc. should compensate them for what they say are losses because of a 2010 oil pipeline spill into the Kalamazoo River system.

The Calhoun County Circuit Court jury in Battle Creek deliberated for about 20 minutes before rejecting the claim over the spill, in which about 8000,000 gallons of oil entered Talmadge Creek near Marshall and the Kalamazoo River system.

Charles Blakeman Jr. of Bellevue and Robert Patterson of Mason said in their suit that the spill prevented them from guiding disabled veterans on deer hunts in the Fort Custer Recreation Area.

"It's just another big company taking advantage," Blakeman Jr. said after the verdict.

About 30 cases have been filed against the Calgary, Alberta-based company over the spill and at least 20 have been settled without a trial, according to The Battle Creek Enquirer (http://bcene.ws/1q3rnWH ).

Enbridge said that the men's company, Extreme Adventures, did not have any business before the spill and did not lose money because of it.

The Battle Creek Enquirer reported Thursday (http://bcene.ws/YD7cpt) that the trial in Calhoun County Circuit Court was the first involving Enbridge. Judge James Kingsley, who presided at the trial, has ruled that the company is liable for the spill, so the only issue in this and other cases was whether the men suing Enbridge suffered damage and how much.

Rodney Crawford, an Enbridge accountant, testified that the men's claims were "speculative."

"The revenue numbers were pulled out of thin air and there is no track record or market study about the demand for the service," he said. "You need to look at the track record and what happens after the year in question."

Blakeman said he and Patterson expected to have clients for the fall hunting season beginning Oct. 1, 2010, but the July 26, 2010, spill changed that plan.

"I was told no hunting along the river. And the deer scattered, and they were not in the rec area. The oil spilldestroyed our basic plan," he said.