Five people were arrested Tuesday after tying themselves to poles erected over the railroad tracks at a Burlington Northern Santa Fe yard in Everett that about a dozen demonstrators blocked to protest train shipments of oil and coal and proposed export terminals in the Northwest. 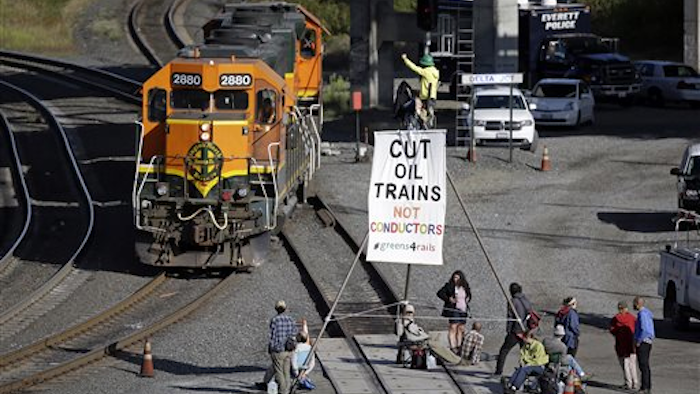 SEATTLE (AP) — Five people were arrested Tuesday after tying themselves to poles erected over the railroad tracks at a Burlington Northern Santa Fe yard in Everett that about a dozen demonstrators blocked to protest train shipments of oil and coal and proposed export terminals in the Northwest.

Two women and three men who refused to leave the more than eight-hour protest were taken to the Snohomish County Jail, railroad spokesman Gus Melonas said. He expected they would be charged with trespassing.

Three trains were delayed and others were diverted around the blocked tracks, Melonas said, but no railroad property was damaged.

Organized by the group Rising Tide Seattle, the protesters set up a tripod of poles over the tracks with a woman perched on top, about 20 feet up, while others locked themselves to the three legs. Railroad police used a motorized lift, also known as a cherry picker, to bring the woman down, Melonas said.

Railroad police, who are commissioned officers with authority to issue citations or make arrests for trespassing or other criminal activity on railroad property, arrived after the protest started about 6 a.m. and asked the demonstrators to leave, Melonas said. Eight left peacefully during the noon hour, but five others locked to the tripod refused to move, he said.

BNSF police called in a team of officers from the city of Bothell with the skill and equipment to cut cables tied closely to the demonstrators' bodies.

The Rising Tide protesters feel fossil fuel shipments are dangerous and that environmental concerns aren't being given enough weight.

"All the people in the blockade have brought concerns in many other avenues," spokeswoman Delaney Piper said. "We feel we have used political venues, advocacy — all of those tools — and this is the tool most necessary right now, because the situation is so dire that direct action is necessary."

"There has not been one fatality on the BNSF Northern Tier from the Great Lakes, across the Plains, through the Rockies to the Pacific Northwest ports — not one fatality — as a result of a hazardous material release since 1981," Melonas said.

Trains have moved oil for decades, although the 100-car oil trains are new in the past couple of years.

"There's a demand for this product, and as a common carrier, we're obligated by law to move it," he said.

Trains carrying coal from northern Plains states as well as oil trains from the Bakken fields of North Dakota have drawn increasing opposition from environmentalists because of plans for terminals in Washington, Oregon and along the Columbia River to export fossil fuels to Asia. Oil trains already are serving refineries at Tacoma, Anacortes and Ferndale.

Coal terminals have been proposed at Longview and Bellingham and oil terminals at Vancouver and Grays Harbor.

Rising Tide Seattle says it's an all-volunteer collective dedicated to taking direct action to confront the causes of climate change.

About two dozen demonstrators on a nearby overpass carried signs that said, "Coal-oil-gas. None shall pass" and "Cut oil trains, not conductors."