An Ohio man who uses a biblical reference and a statement against "poisoned waters" on billboards near two wells for disposal of gas-drilling wastewater says the messages are coming down. 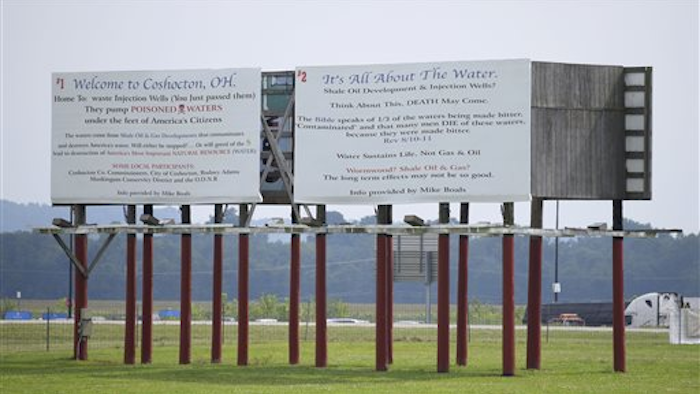 COLUMBUS, Ohio (AP) — An Ohio man who uses a biblical reference and a statement against "poisoned waters" on billboards near two wells for disposal of gas-drilling wastewater says the messages are coming down.

Michael Boals, of Coshocton (kuh-SHAHK'-tuhn) east of Columbus, told The Associated Press the billboards' owners are ending his lease agreement Tuesday. He said a July lawsuit contending the signs contain false and defamatory attacks prompted them to end his three-month verbal agreement after two months.

The complaint by Austin, Texas-based Buckeye Brine objected to statements on the two billboards along U.S. Route 36, including a sign that says "DEATH may come."

Boals refused to remove the signs on free speech grounds.

A message seeking comment was left Monday with the company, which says the wells are safe and legal.