Rice University scientists have performed a detailed analysis of water produced by hydraulic fracturing (aka fracking) of three gas reservoirs and suggested environmentally friendly remedies are needed to treat and reuse it. 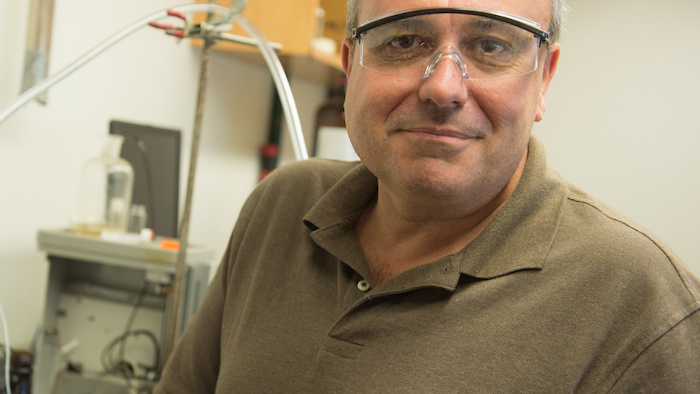 HOUSTON – Rice University scientists have performed a detailed analysis of water produced by hydraulic fracturing (aka fracking) of three gas reservoirs and suggested environmentally friendly remedies are needed to treat and reuse it.

More advanced recycling rather than disposal of “produced” water pumped back out of wells could calm fears of accidental spillage and save millions of gallons of fresh water a year, said Rice chemist Andrew Barron. He led the study that appeared this week in the Royal Society of Chemistry journal Environmental Science: Processes and Impacts.

The amount of water used by Texas drillers for fracking may only be 1.5 percent of that used by farming and municipalities, but it still amounts to as much as 5.6 million gallons a year for the Texas portion of the Haynesville formation and 2.8 million gallons for Eagle Ford. That, Barron said, can place a considerable burden on nearby communities.

Barron noted that shale gas wells, the focus of the new study, make most of their water within the first few weeks of production. After that, a few barrels a day are commonly produced.

The project began with chemical analysis of fracking fluids pumped through gas-producing shale formations in Texas, Pennsylvania and New Mexico. Barron and the study’s lead author, Rice alumnus Samuel Maguire-Boyle, found that shale oil and gas-produced water does not contain significant amounts of the polyaromatic hydrocarbons that could pose health hazards; but minute amounts of other chemical compounds led them to believe the industry would be wise to focus its efforts on developing nonchemical treatments for fracking and produced water.

Currently, fracturing fluid pumped into a well bore to loosen gas and oil from shale is either directed toward closed fluid-capture systems when it comes out or is sent back into the ground for storage. But neither strategy is an effective long-term solution, Barron said.

“Ultimately, it will be necessary to clean produced water for reuse in fracking,” he said. “In addition, there is the potential to recover the fraction of hydrocarbon in the produced water.”

Fracking fluid is 90 percent water, Barron said. Eight to nine percent of the fluid contains sand or ceramic proppant particles that wedge themselves into tiny fractures in the rock, holding open paths for gas and oil to escape to the production well.

The remaining 1 or 2 percent, however, may contain salts, friction reducers, scale inhibitors, biocides, gelling agents, gel breakers and organic and inorganic acids. The organic molecules either occur naturally or are a residue from the added components.

The researchers found most of the salt, organic and other minerals that appear in produced water from shale gas reservoirs originate in the connate waters trapped in the dense rock over geologic time scales. These should be of little concern, they wrote

But they also found that produced water contained potentially toxic chlorocarbons and organobromides, probably formed from interactions between high levels of bacteria in the water and salts or chemical treatments used in fracking fluids.

Barron said industry sometimes uses chlorine dioxide or hypochlorite treatments to recycle produced water for reuse, but these treatments can actually enhance bacteria’s ability to convert naturally occurring hydrocarbons to chlorocarbons and organobromides. The researchers suggested this transition could happen either downhole or in storage ponds where produced water is treated.

“We believe the industry needs to investigate alternative, nonchemical treatments to avoid the formation of compounds that don’t occur in nature,” Barron said.

Primarily, he said, the researchers want their analysis to anticipate future problems as industry develops processes to remove organic compounds from water bound for reuse.

Barron said the new paper should be of particular interest to international producers who are preparing to ramp up gas-recovery efforts in the United Kingdom, which recently announced plans to expand drilling, and other European countries.

“As the U.K. and other European countries are looking to start hydraulic fracturing, it is important that they adopt best practices at the start, as opposed to evolving over time, as it has occurred here in the United States,” he said.