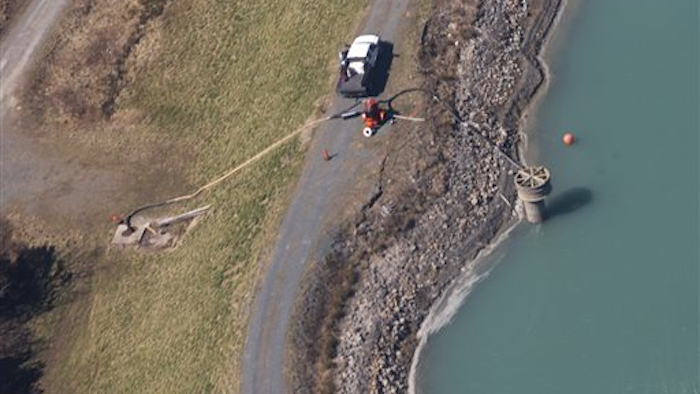 State Department of Environment and Natural Resources spokesman Jamie Kritzer said inspectors from the agency visited Duke's Cape Fear Plant on March 11 and 18, but did not see the crack.

Aerial photos taken March 10 by the environmental group WaterKeeper Alliance show the fissure, which was clearly marked by metal stakes topped with orange streamers. The dam also appears to be sagging and bulging near the crack.

The agency has said it didn't know about the crack until Duke reported it on March 20, after the company was cited for illegally pumping 61 million gallons of contaminated wastewater into the river. Duke has refused to comment on its latest environmental violation or whether the crack was in any way connected to the unlawful pumping, which had been going on for months.

Kritzer said Thursday the state agency, which is known as DENR, may now consider seeking a change to North Carolina law, which currently only requires dam owners to notify regulators when there is judged to be a likelihood the dam might fail and emergency action is proposed.

After Duke reported the crack on March 20, the state ordered the company to come up with an emergency action plan. Duke says the crack has since been repaired and that the dam was not in danger of collapse.

The nation's largest electricity company has been under intense scrutiny since a massive Feb. 2 spill at a coal ash dump in Eden coated 70 miles of the Dan River in gray sludge. The ash, which is a byproduct left after coal is burned to generate electricity, contains toxic chemicals including arsenic, lead and mercury.

Kritzer said Division of Water Resources staff saw a big orange pump that Duke was using to drain the pond on March 11, but did not notice the crack in the earthen dam that was just a few feet away. Inspectors returned to the Duke plant the following week, but did not go to the area where the crack was located, Kritzer said.

"Had they noticed a crack, they would've alerted their colleagues in the Dam Safety Program," Kritzer said.

Though the inspectors were concerned the water level in the pond was low, the state agency did not take any enforcement action on the issue until after the photos taken by the WaterKeeper Alliance showing the pumping were widely reported in the media.

Donna Lisenby, a spokeswoman for the environmental group, questioned how state inspectors could have possibly missed a crack in the dam so large it could be seen from an airplane.

"They want the public to believe they failed to notice a 35-foot-long, 4-inch-wide crack so large a fifth grader could have seen it," Lisenby said. "This is the last straw. The public simply can no longer trust DENR to competently investigate the wide array of problems at Duke Energy coal ash ponds at multiple sites across North Carolina. Once again Duke failed to notify the agency of a serious problem in a timely fashion and DENR failed to find the problem even when they were standing right on top of it."