A medical waste burning facility pressed to leave a Utah suburb by residents and legislators worried about toxic emissions has picked out a new home on the western shore of Great Salt Lake, a move which has raised health concerns for its future neighbors. 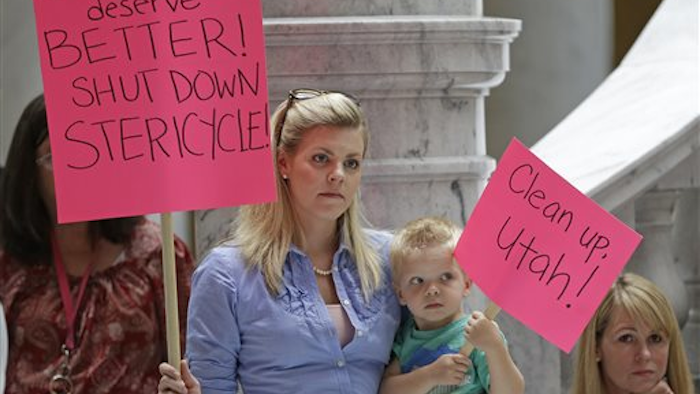 TOOELE, Utah (AP) — A medical waste burning facility pressed to leave a Utah suburb by residents and legislators worried about toxic emissions has picked out a new home on the western shore of Great Salt Lake, a move which has raised health concerns for its future neighbors.

But some residents say they don't want the area to be Utah's waste basket. Tooele County already has an old incinerator, a magnesium-producing plant and a decades-old chemical weapons stockpile that federal officials have begun clearing out in recent years.

"I just want to know we're safe out here," said Katrina Hill, who organized a Wednesday panel including a Stericycle representative, county officials and a clean-air advocate. About two dozen residents attended the meeting.

"We definitely scrutinize everything that they do," said Department of Environmental Quality spokeswoman Donna Kemp Spangler.

Stericycle says the move to Tooele County would be good for everyone.

"We feel like it's in the best interest of everyone if we relocate," Stericycle, Inc. spokeswoman Jennifer Koenig said. "The neighborhood has grown up around us. Some residents have expressed concern and that's really kind of the reason."

Stericycle officials tried to ease worries at the meeting, saying the plant would be 20 miles from any homes and that a stricter set of incoming emissions standards should quell health concerns.

Activists and others have criticized the company in recent years, saying its current location routinely releases toxic smoke that threatens public health. A state study released earlier this year indicates that rates of breast and prostate cancer in surrounding towns were higher than the state average for 12 years, but scientists say the results are not definitive because those cancers are not linked to air, water or soil.

Gov. Gary Herbert called for the study amid rising concerns about the facility.

Stericycle is in court challenging a notice of violation that state regulators issued against it last year. The Department of Environmental Quality claims the company exceeded emissions limits in December 2011.

Before firing up the Tooele incinerator, the company must gain approval from the state Division of Air Quality and county officials. At the earliest, its move-in date is two years away, company representatives say.

The proposed move hits the county during a rough financial stretch. During the recession, the county dipped into designated funds to keep its sports complex open. Since 2012, the county has slashed its workforce by nearly 30 percent and cancelled the 2013 fair.

Whether the proposal presents any obvious gains for the county is "the biggest question that's unanswered at the moment," Tooele County Commissioner Shawn Milne said.

The facility would add about 30 jobs, but it won't likely hike county revenues, he said.

Stericycle's supporters contend that the facility performs a necessary function. They say Utah's vast west desert is a good location— separated from neighborhoods but close to the highway.

Some critics say medical trash shouldn't be burned at all.

"I still think it's outdated," said Alicia Connell of Communities for Clean Air.

The incinerator burns 7,000 tons of medical garbage each year, according to the Utah Division of Air Quality. It ranges from chemotherapy waste and laboratory tools to human tissue and fluids and animal tissues.

Concerns about the facility prompted lawmakers to pass a law banning any such operation from going up within 2 miles of a neighborhood.

Jeff McNeill, who lives about 27 miles from the proposed site, said he approves of the plan so long as county officials block developers from building homes nearby.

For Hill, a mother of four, the prospect of stricter fines for violations and the chance to hear more from the company Wednesday offered some relief, she said. "It makes that a little easier to swallow."