Kansas Gov. Sam Brownback declared Monday that a new federal rule for cutting carbon emissions is a "war against middle America," only days after his administration complicated potential efforts to comply by signing off on a new, $2.8 billion coal-fired power plant. 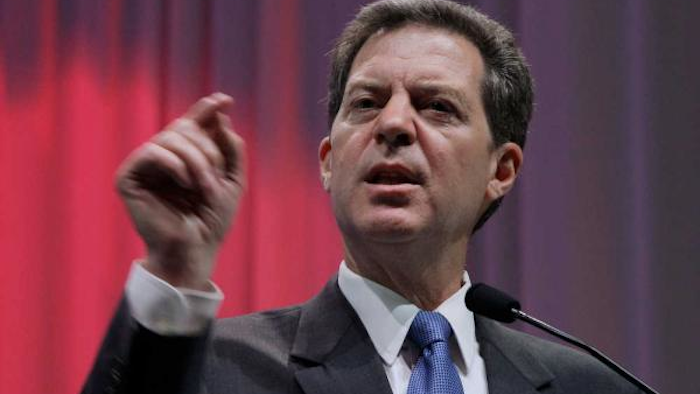 TOPEKA, Kan. (AP) — Kansas Gov. Sam Brownback declared Monday that a new federal rule for cutting carbon emissions is a "war against middle America," only days after his administration complicated potential efforts to comply by signing off on a new, $2.8 billion coal-fired power plant.

The U.S. Environmental Protection Agency's regulation addresses power plant emissions of heat-trapping greenhouse gases blamed for climate change. The 645-page rule sets targets for states, giving them some flexibility for meeting them, and the EPA said that by 2030, Kansas would have to cut emissions from power plants from 2012 levels by 23 percent.

The White House said the rule is designed to fight environmental and public health problems associated with global warming, but Brownback, other state officials and representatives of major Kansas utilities worried that it will lead to higher energy costs, damaging the economy. Coal-fired plants provide about 63 percent of the state's electricity.

The EPA's announcement of the rule Monday came only three days after Brownback's secretary of health and environment gave the go-ahead for the new coal-fired power plant proposed by Hays-based Sunflower Electric Power Corp. for a site outside Holcomb in southwest Kansas.

Sunflower spokeswoman Cindy Hertel said the company is reviewing the new EPA rule and can't say how it will affect the Holcomb project. But environmentalists argue that the plant's construction would hamper any serious attempt to reduce greenhouse gas emissions.

"It doesn't make any sense for Kansas to focus on yesterday's technology," said Moti Rieber, an Overland Park rabbi and director of Kansas Interfaith Power and Light, a coalition of religious groups on environmental issues.

Sara Belfry, a spokeswoman for the Kansas Department of Health and Environment, said the EPA's work on the new emissions rule had no bearing on the timing of the state's decision on the coal-fired plant. She noted that the EPA's rule isn't final and could change.

Brownback, who served in the U.S. Senate before being elected governor in 2010, said he's troubled that Democratic President Barack Obama's administration is moving ahead without congressional approval of such a rule. He said Kansas already is working "to do its part to protect the environment" by developing wind farms and increasing the use of natural gas.

"This is more of the Obama Administration's war against middle America," Brownback said in a statement. "We need Kansas solutions for Kansans."

The new law takes effect July 1, and Brownback has said it's an attempt to assert state control over environmental policy.

Belfry said KDHE will work to ensure that the state law and the EPA rule "function together." She said there's no timetable yet for developing state regulations.

But Rieber said the new state law was merely "scoring political points," noting that the EPA is expecting each state to develop its own plan for curbing greenhouse gas emissions.

Meanwhile, Westar Energy Inc., the state's largest electric company, will develop its own plan for curbing such emissions, said spokeswoman Gina Penzig. But she said tougher environmental regulations have driven up the utility's costs — and the bills of Westar's nearly 700,000 customers — over the past decade.

"Ultimately, it is our customers who pay the cost," she said.