Two of the Southwest's largest coal-fired power plants straddle the San Juan River in northwestern New Mexico, one within clear view of the other. But one of them didn't factor into the Obama administration's plans to reduce carbon dioxide emissions across the nation because it is on an American Indian reservation. 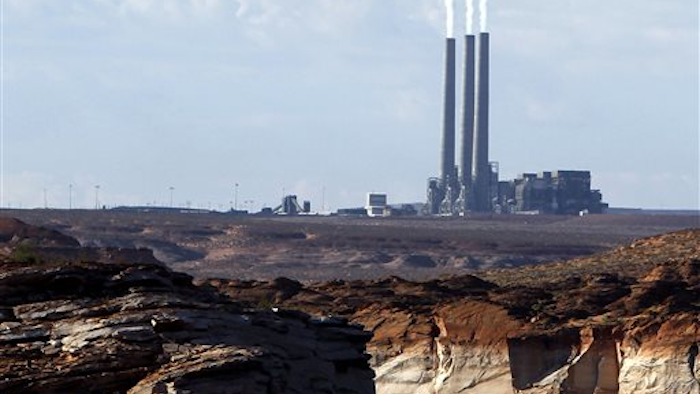 FLAGSTAFF, Ariz. (AP) — Two of the Southwest's largest coal-fired power plants straddle the San Juan River in northwestern New Mexico, one within clear view of the other.

But one of them didn't factor into the Obama administration's plans to reduce carbon dioxide emissions across the nation because it is on an American Indian reservation.

The U.S. Environmental Protection Agency said it will hold off on emissions standards for four power plants on reservations to talk further with tribes and give them an opportunity to create cleanup plans of their own. If the tribes decline, the federal government will craft plans for them.

"There's a different federal-tribal relationship than there are with states, so we wanted to take that into account," EPA spokeswoman Liz Purchia said.

Two of the power plants on the Navajo Nation — the Navajo Generating Station in Page and the Four Corners Power Plant near Farmington, New Mexico — are among the country's top emitters of carbon dioxide, releasing 17.8 million short tons and 12.9 million short tons in 2013, respectively. Both have plans to shutter some of the generating units, which will cut down on carbon dioxide emissions that are blamed for heating the planet.

The other two are the natural gas-powered South Point Energy Center on the Fort Mohave Indian Reservation in western Arizona and the coal-fired Bonanza Power Plant on Ute lands in northeastern Utah.

The administration on Monday unveiled its plan to reduce carbon dioxide emissions from U.S. power plants by 30 percent from 2005 levels by 2030.

The EPA said it will publish a supplemental proposal covering the four reservation plants after it gives the public a chance to weigh in on what approaches it could take with the tribes, including multijurisdictional plans with states.

Making a distinction between states and tribes when it comes to the Clean Air Act isn't anything new. The EPA said the approach recognizes tribal sovereignty. But it has drawn criticism because pollution controls could end up being delayed for reservation power plants. Tribes often have fewer resources to develop and implement regulations.

"Once again, it's sort of this gray area jurisdictionally with the emphasis being on state plans yet these facilities are on tribal land, maybe being given a separate category for compliance," said Mike Eisenfeld, of the San Juan Citizens Alliance, an environmental advocacy group. "The bottom line is, they need to be on the same timeline."

The Navajo Nation already has set standards for sulfur dioxide, particulate matter and nitrogen oxide emissions from power plants on the reservation. But doing so required the tribe to reach agreements with the utilities that run the Navajo Generating Station and the Four Corners Power Plant because the leases prevent the tribe from directly regulating those facilities, said Stephen Etsitty, executive director of the Navajo Nation Environmental Protection Agency.

He said Tuesday it would be a major undertaking for the Navajo EPA to ramp up its programs to create carbon dioxide emissions standards that are equivalent to federal standards. But he said the tribe is up to the task.

Tribal officials will talk about how that could be accomplished while keeping renewable energy in mind, Etsitty said.

The Navajo Nation is hugely dependent on coal for revenue. The tribe recently bought a coal mine in New Mexico and updated its energy policy that keeps coal prominently in its energy mix but factors in renewable power.

The reliance on coal worries Navajos like Wahleah Johns, who has been pushing the tribe to transition to renewable sources.

"I appreciate the effort that Obama is pushing to address CO2 reductions, but I hope ... that they will help our tribes to push us much further and quicker toward either transitioning to clean energy or trying to implement these standards of reducing pollution from these power plants," she said.

One concern for the operators of the reservation power plants is that any reductions at facilities on tribal lands might not factor into overall reductions in state plans. Arizona will be tasked with reducing carbon dioxide emissions by about half under the EPA's proposal released Monday.

"If we could come up with a comprehensive approach that addresses our entire system, it would be a lot easier to operate under rather than having different plans for different sources," said Kara Montalvo, director of environmental compliance and permitting for the Salt River Project, which runs Navajo Generating Station.