Ten western governors met Tuesday with Gina McCarthy, the Environmental Protection Agency administrator, to talk about cleaner power plant rules proposed by the Obama administration — including cuts in greenhouse gas emissions from coal. A sampling of what some governors have to say about it: 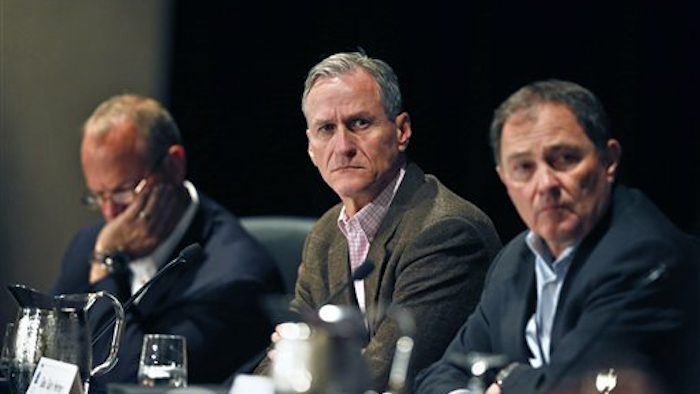 COLORADO SPRINGS, Colo. (AP) — Ten western governors met Tuesday with Gina McCarthy, the Environmental Protection Agency administrator, to talk about cleaner power plant rules proposed by the Obama administration — including cuts in greenhouse gas emissions from coal. A sampling of what some governors have to say about it:

ARIZONA: GOP Gov. Jan Brewer objects to the EPA plan and believes the agency has overstepped its authority, her spokesman has said. Arizona state lawmakers passed a law in 2010 that bars new state rules or regional agreements to reduce greenhouse gases unless the Legislature approves. It's unclear how the EPAproposal will play out in Arizona.

COLORADO: Democratic Gov. John Hickenlooper said it was "refreshing" that McCarthy has been looking for input from governors on the EPA proposal. He noted that Colorado is moving to diversify its energy portfolio into an "all-of-the-above" approach. On climate change, he said, "I do think that climate change is being caused by mankind's activity."

KANSAS: Republican Gov. Sam Brownback was blunt in his assessment when the rules were announced. "This is more of the Obama administration's war against middle America," he said. Kansas relies on coal-fired plants for about 63 percent of the state's electricity.

NEVADA: Republican Gov. Brian Sandoval praised McCarthy for communicating with him before and after the rules were announced. While Sandoval said his administration is still reviewing the plan, he noted that Nevada already is decreasing its reliance on coal, citing legislation he signed that will close a couple of coal plants and replace them with renewable energy sources. "We felt like we were ahead of the curve on this," he said.

SOUTH DAKOTA: GOP Gov. Dennis Daugaard has said he is concerned that the rules will raise energy prices — a worry other governors share. Daugaard wants a clearer understanding of how involved the federal government will be in formulating state plans to reduce emissions.

WYOMING: Republican Gov. Matt Mead says he is skeptical about man-made climate change. He's reserved judgment on the EPA plan until his coal-producing state has studied it. Mead has said he will "fight for coal" if the regulations aren't reasonable.