Two days after warning some 400,000 people in Ohio and Michigan not to drink their tap water, the mayor of Ohio's fourth-largest city declared on Monday that the water was now safe and took a sip. 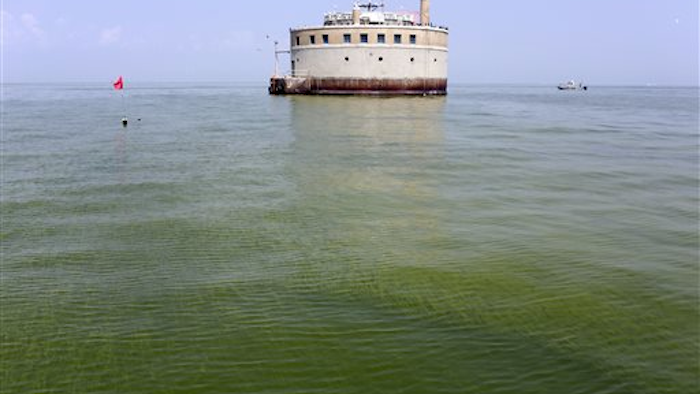 TOLEDO, Ohio (AP) — Two days after warning some 400,000 people in Ohio and Michigan not to drink their tap water, the mayor of Ohio's fourth-largest city declared on Monday that the water was now safe and took a sip.

The city lifted the advisory after dozens of tests over the weekend showed an algae-induced toxin contaminating Lake Erie had dropped to safe levels following intensive chemical treatments.

Ohio Gov. John Kasich said the state will conduct a full review of what happened, including taking a look at Toledo's aging water system and figuring out how to reduce pollution that feeds algae in the western end of the lake.

It's still not clear, he told The Associated Press, whether the algae bloom centered where Toledo draws its water was entirely to blame or if changes also are needed with the water-supply system.

The weekend warning had led Kasich to declare a state of emergency in three counties, bringing in soldiers from the Ohio National Guard to deliver bottled water and operate purification systems to produce drinkable water.

Residents were told not to boil the water, brush their teeth with it or cook with it. They filled their cars with bottled water handed out by volunteers. Grocery stores diverted water shipments to the area and farmers stocked tanks with well water. In southeastern Michigan, authorities operated water stations for the 30,000 customers affected by the contamination.

After the ban was lifted, city officials recommended that residents who had not used their water since Saturday flush out their systems. They asked people not to water lawns or wash cars at the risk of overwhelming the system.

Some weren't ready to drink the tap water just yet.

"I'm waiting for two or three days," said Aretha Howard, of Toledo. "I have a pregnant daughter at home. She can't drink this water."

Drinking the tainted water could cause vomiting, cramps and rashes. No serious illnesses had been reported, health officials said Monday.

Tap water accounts for two-thirds of the drinking water consumed in homes across the U.S., according to a study released by the U.S. Department of Agriculture three years ago, while research from the Beverage Marketing Corporation shows that bottled water makes up half of all water consumed nationwide.

Combating the toxins in Toledo's water was a challenge because of the size of the system and a lack of standards on how to test the water.

"We knew we had a problem," Kasich said. "The question was how do we measure it, and what do we about it?"

Carbon was added to the water at the point of intake and chlorine was also dumped into the system to help clean the water, the mayor said.

"This isn't an exact science," said Collins, who took a drink of the tap water Monday morning, saying it tasted great.

Regulators monitoring the situation ran a variety of samples before settling on one of four tests available. They plan on using the test recommended by the U.S. Environmental Protection Agency going forward, the governor said. The state EPA, according to Kasich, also will be looking at setting rules on how often the water should be tested — something that isn't in place now.