Eerie Water Crisis Far From Over

The threat of toxins contaminating water supplies along western Lake Erie is far from over even after Ohio's fourth-largest city declared its water safe again. The chances of another water emergency over the next few months will depend a lot the winds, rains and temperatures that dictate how large the algae grow and where algae blooms end up. 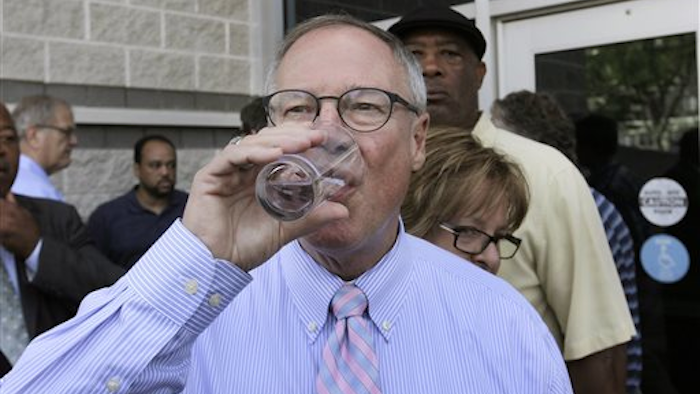 TOLEDO, Ohio (AP) — The threat of toxins contaminating water supplies along western Lake Erie is far from over even after Ohio's fourth-largest city declared its water safe again.

That's because the algae leaving behind the dangerous toxins each summer aren't supposed to peak until September.

The chances of another water emergency over the next few months will depend a lot the winds, rains and temperatures that dictate how large the algae grow and where algae blooms end up.

"To some degree, there are only certain things we can control," said Craig Butler, director of Ohio's Environmental Protection Agency. "What is possible is making sure systems taking water from Lake Erie are being very vigilant with the treatment process."

What role the algae-induced toxin played in fouling the water supply for 400,000 people in and around Toledo is being investigated, as is the city's aging water supply system and how it operates. But researchers believe winds pushed the algae right to where Toledo collects its water from the lake.

"When they bloom and it's right over our intake, we're at its mercy," said Ed Moore, Toledo's public utilities director. "This is Mother Nature we're dealing with. This was out of our control."

Water plants add a chemical called activated carbon to absorb algae before filtering the water. What makes combating the toxin a challenge is that there are no standards on how to handle it or rules on how often to test the water.

Butler, the state's EPA director, said Tuesday that he thinks the federal government needs to come up with standard guidelines on both what are acceptable limits for the microsystin found in Toledo's water and how often testing should be done.

Carol Stepien, director of the University of Toledo's Lake Erie Center, said the risk of a water treatment plant being overwhelmed by toxins will go on until the pollutants feeding the algae are brought under control.

"I'm hoping this acts as a catalyst much like the Cuyahoga River burning," she said, referring to the 1969 Cleveland fire that helped spur the environmental movement and the federal Clean Water Act.

Lake Erie, the shallowest of the Great Lakes, supplies drinking water to 11 million people in Ohio, Michigan, Pennsylvania and New York along with Canada. The western end is particularly shallow, making it more vulnerable to the algae, though other areas of the Great Lakes are not immune.

Lake Michigan's Green Bay is a source for drinking water in Wisconsin and has been plagued by various types of nuisance algae. Algae in a reservoir near Columbus left a foul smell and flavor in the city's water supply last fall.

But right now the greatest concern is in Lake Erie.

In September, one township just east of Toledo told its 2,000 residents not to drink or use the water coming from their taps — believed to be the first time a community has banned residents from using the water because of toxins in the lake.

Carroll Township has since upgraded its water plant to better combat the algae-fueled toxin. But Henry Biggert, the township's water plant superintendent, said they can only do so much with the water coming out of the lake.

"We can handle it better, absolutely," Biggert said. "But could we handle it if it got worse? That's a really good question. That's where my concern is."