United Nations Secretary-General Ban Ki-Moon is challenging more than 100 world leaders at a climate summit to set a new course for a warming world and reverse the rise of heat-trapping gases. 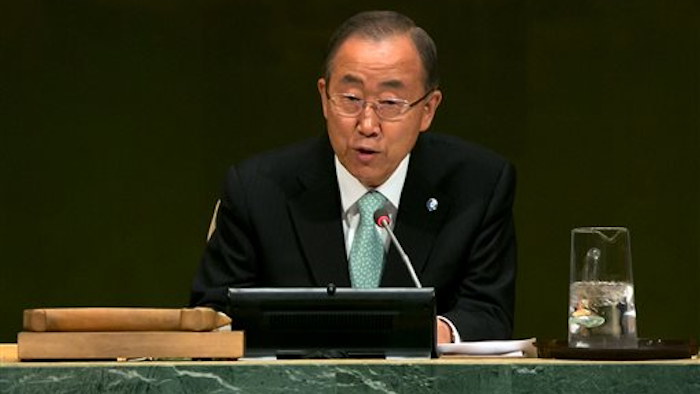 UNITED NATIONS (AP) — United Nations Secretary-General Ban Ki-Moon is challenging more than 100 world leaders at a climate summit to set a new course for a warming world and reverse the rise of heat-trapping gases.

Tuesday's one-day summit at the annual U.N. General Assembly gathering of world leaders is a forum for non-binding pledges. It was designed to lay the groundwork for a new global treaty to tackle climate change due at the end of next year.

"Today we must set the world on a new course," Ban said in opening remarks. "Climate change is the defining issue of our age. It is defining our present. Our response will define our future."

And world leaders took over with the first of many of the non-binding pledges.

The European Union offered a rare proposal — specific targets beyond 2020 — saying its member nations would cut greenhouse gas emissions by 40 percent by 2030 compared to 1990 levels, use renewable energy for 27 percent of the bloc's power and boost energy efficiency by 30 percent.

Jose Manuel Barroso, president of the European Commission, stressed it could be done without harming the economy in his four-minute speech Tuesday. He said over the next seven years, the European Union would provide $3 billion euros (nearly $3.9 billion) to help developing countries become more sustainable.

"The European Union is on track to meet our targets and at same time we have seen our economy grow," Barroso. "We prove climate protection and a strong economy must go hand in hand."

France for its part promised $1 billion.

Ban said Earth needs all hands on deck to weather the unprecedented challenge.

"By the end of this century we must be carbon neutral," he said. "We must not emit more carbon than our planet can absorb."

Pachauri and Ban told world leaders the effects of global warming are already here, pointing to a U.N. building that flooded during the devastating Superstorm Sandy in 2012. He said it will get worse with droughts, storms, food and water storms and even more violent climate-driven conflicts.

And, Pachauri said, "a steady rise in our death toll, especially among the world's poorest. How on Earth can we leave our children with a world like this?"