The millions of dollars invested by communities like Miami Beach in climate change adaptation need the backup of long-term national policies like the president's plan to reduce carbon dioxide emissions from power plants, the head of the Environmental Protection Agency said Thursday. 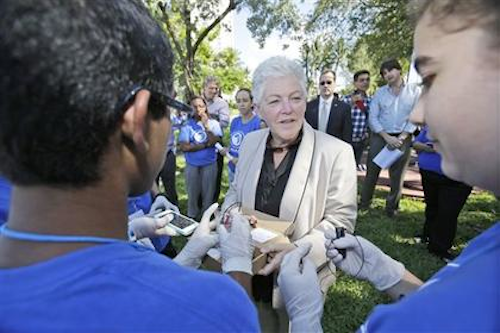 MIAMI BEACH, Fla. (AP) — The millions of dollars invested by communities like Miami Beach in climate change adaptation need the backup of long-term national policies like the president's plan to reduce carbon dioxide emissions from power plants, the head of the Environmental Protection Agency said Thursday.

Administrator Gina McCarthy joined Democratic U.S. Sens. Bill Nelson and Sheldon Whitehouse in a bayfront neighborhood that in recent years frequently was flooded by seasonal high tides, with water rising up through aging infrastructure to swamp streets and businesses even if it wasn't raining.

Miami Beach expects to spend up to $400 million over five years to add about 60 new storm water pumps across the city to improve drainage and reduce the flooding. The extreme high tides were expected to peak Thursday, but some of the new pumps already are operational and the streets were dry around the park where McCarthy and the senators joined students recording salinity levels.

"How are we going to pump our way out of this challenge if we don't start now to take action to mitigate the release of carbon pollution emissions, which is fueling this changing climate? We are not going to be able to make this money worthwhile and protect us in the long run if we don't take the bold action they've taken here to actually adapt and become resilient to protect the communities in the short term," McCarthy said.

The low-lying Miami area is not unique in its vulnerability to the effects of climate change or in its desire to make adaptations now, McCarthy said.

Whitehouse, of Rhode Island, agreed, noting that 10 inches of sea level rise has been documented at the naval station in Newport since the 1930s.

"We have the same problem that Florida has," he said. "That 10 inches isn't going away."