Stranded families growing weary and frustrated since a deadly Texas fertilizer plant explosion left them barricaded from their battered homes finally began returning Saturday, but only under a curfew and strict warnings to not wander beyond their own yards. 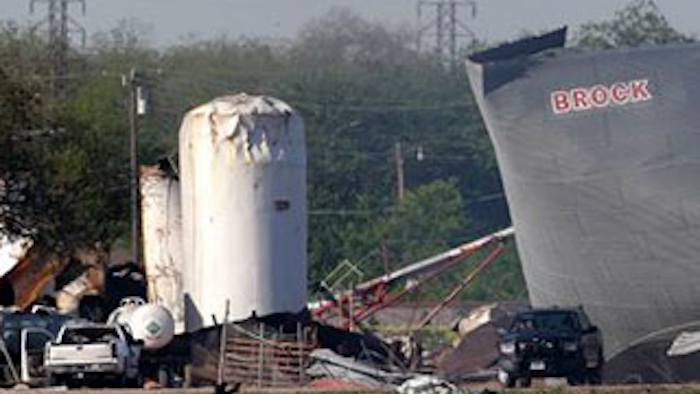 WEST, Texas (AP) — Stranded families growing weary and frustrated since a deadly Texas fertilizer plant explosion left them barricaded from their battered homes finally began returning Saturday, but only under a curfew and strict warnings to not wander beyond their own yards.

Authorities gave the much-awaited OK after a nervous morning. Emergency workers had told residents packed in a hotel — waiting for updates about their neighborhood — that leaking gas tanks were causing small fires near the blast site, keeping authorities from lifting blockades.

Officials quickly emphasized that the fires were contained and the town of West was not in danger. They later repeated that message as evacuees in a mile-long line of cars inched along a downtown road and toward the blast radius, although the chances that most would get to their houses Saturday night dimmed as a 7 p.m. curfew approached.

Evacuated residents had been anxiously waiting to return and assess what is left of roughly 80 damaged homes after the blast Wednesday night at West Fertilizer Co. that killed 14 and injured 200 more. The blast scarred a four-to-five block radius that included a nursing home, an apartment building and a school.

Those allowed to return first were residents in a small quadrant of streets that were farthest away from the blast in the barricaded area, and whose homes sustained relatively less damage. Many appeared ready to begin living at their homes again and were not the least bit deterred as authorities went car to car asking if they were current on their tetanus shots and instructing them to drink only bottled water.

Some who do not live in the designated area were turned away. Officials said it could be weeks before those who lived closest to the explosion — many whose homes were irreparably destroyed — could go back.

Tom and Tiffanie Juntunen, who were among the first responders to the blast, wanted to grab a few essentials before continuing to spend the night with friends.

"There's a boil order, utilities could be sketchy, better to hit the road," said Tom Juntunen, a 33-year-old construction worker.

During a town hall meeting Saturday, Mayor Tommy Muska apologized for failing to communicate with residents, telling them he had been focused on technical aspects of the situation.

He said the damage northwest of the site is the worst. "When you see this place you will know a miracle happened," Muska told the town hall crowd.

Students from a school near the plant that was heavily damaged by the blast will finish their year in a nearby town at a facility repainted in their school colors, red and black.

Earlier Saturday, at a hotel where evacuees huddled, paramedic and town spokesman Bryce Reed told residents that small tanks were leaking and had triggered fires in one part of town. He said the fires were small and were contained, and didn't cause further injuries.

"The whole place is still on fire, smoldering, all that kind of stuff. It could spark up," Reed said. But, he cautioned, "There isn't really enough structure left to light up and burn."

Reed described dozens of portable, white tanks at the site that are typically filled with anhydrous ammonia from larger storage tanks for when farmers request them. The tanks get weak when they are exposed to fire and bleed, he said.

The tanks are attached to plows pulled by tractors and feed streams of the chemical into the ground as the plow passes to fertilize. Reed said they resemble large, horizontal propane tanks.

Assistant State Fire Marshal Kelly Kistner said Saturday night that there's no sign of criminal activity in the explosion. Kistner said four tanks at the site that contain ammonium nitrate and anhydrous ammonia would be removed to safeguard workers, but he stressed to reporters there was no danger to citizens.

Yet there were still tense moments. Ron Price, a 53-year-old construction worker, hastily parked his truck outside City Hall where dozens of reporters had gathered for a news conference, and warned journalists to get away from the windows. He said state troopers had just shooed him away from the barricade after they, too, "came flying down the road" from a half-block away.

Price said he was told to flee because there was another chance of an explosion. Authorities said there was never such a risk.

"It was pretty scary. Everybody just jumped and took off running," Price said.

Dorothy Sulak, who lost her home and her job when the blast went off, was among those hoping she could get back in. The fertilizer plant secretary fled with only the clothes on her back.

There's a hole in her roof now, and her medicine, cash, even her glasses, are somewhere in the rubble. She used reading glasses for three days, until she could get a ride to nearby Waco to be fitted for new prescription frames.