When they saw 30-foot flames licking the sky inside a massive fertilizer plant, firefighters in this tiny Texas town rushed to evacuate nearby buildings and raced to spray water on tanks of chemicals, hoping to prevent a catastrophe. They were more concerned with preventing toxic gas from leaking out of the facility and drifting into nearby homes. 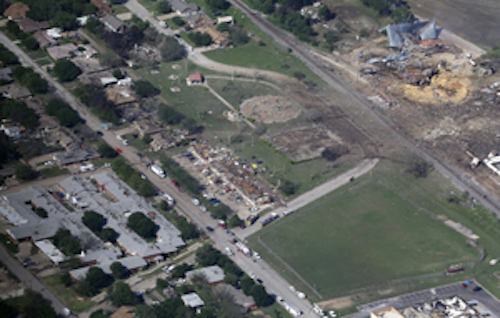 WEST, Texas (AP) — When they saw 30-foot flames licking the sky inside a massive fertilizer plant, firefighters in this tiny Texas town rushed to evacuate nearby buildings and raced to spray water on tanks of chemicals, hoping to prevent a catastrophe.

They didn't know, and probably could not imagine, that the plant would soon explode into a deadly fireball and lay waste to much of the community. Instead, they were more concerned with preventing toxic gas from leaking out of the facility and drifting into nearby homes.

Four weeks after the blinding blast, investigators have yet to announce not only what started the fire and touched off the explosion, but precisely what happened in those frenzied moments before 14 people were killed. They are especially interested in the town's volunteer fire crews, who may not have been fully aware of the dangers they faced. Did they know about the potential for an explosion? Were they trained to prevent one? Should they have acted differently?

"We do not know," said Daniel Horowitz, managing director of the U.S. Chemical Safety Board, one of the federal agencies involved in the investigation. "With interviews still underway, it's difficult to say at this point what was the level of knowledge and what did they know about suppression techniques."

Associated Press interviews with first-responders suggest that firefighters' foremost fear was a poisonous cloud of anhydrous ammonia. But the greater threat turned out to be the plant's vast stockpile of a common fertilizer, ammonium nitrate, which can also serve as a cheap alternative to dynamite.

State and federal agents plan to release some of their findings Thursday after spending the last month investigating whether the blast was an industrial accident or a criminal act.

Last week, the Texas Rangers and county sheriff's office launched their own criminal investigation, the same day a paramedic who helped evacuate residents was arrested on a charge of possessing a destructive device. The paramedic has not been accused of wrongdoing in connection to the April 17 blast.

West Mayor Tommy Muska said he did not know how much the firefighters knew about the chemicals on the property, but the fire crew included a manager from the fertilizer plant.

Cody Dragoo "would have known exactly what was in there and the dangers that were there," the mayor said, explaining why he believes firefighters were backing away from the flames at the West Fertilizer Co.

They did not get away fast enough. The plant blew up within 20 minutes of the first call for help. Dragoo was among 10 firefighters and paramedics killed in the blast. Two residents helping to fight the fire were also killed, along with two other people.

The confusion only got worse. When the McLennan County emergency director arrived on the scene, he was unfamiliar with the hazardous materials on the premises. The primary map used by first-responders was from a Google Earth app on an iPad. They had no public address system, and, at least initially, no clear command structure.

But it's unclear whether simply knowing about the ammonium nitrate would have been enough. The National Fire Protection Association has codes on handling ammonium nitrate, but it does not advise how to fight such fires because circumstances vary, said Guy Colonna, the division manager of the industrial and chemical engineering group.

Federal and state governments aren't much help either. Most of the rules governing the fertilizer are designed to ensure it doesn't end up in criminals' hands, especially after Timothy McVeigh used it in the 1995 Oklahoma City bombing.

The U.S. Environmental Protection Agency filed an alert on the dangers of ammonium nitrate in 1997, warning that it should be kept far from heat and contaminants. The Chemical Safety Board urged the EPA and the Occupational Safety and Health Administration to adopt new standards more than 10 years ago, but it never happened.

Texas farm country is dotted with fertilizer plants in towns served by volunteer firefighters. But a 2009 blaze at the El Dorado Chemical Co. in Bryan, Texas, unfolded much differently than the disaster in West. Bryan firefighters knew a welder had accidentally heated up an ammonium nitrate bin and that the chemical was smoldering. They evacuated the area and let the facility burn to the ground. Nothing exploded.

It's too early to say whether that approach would have worked in West because no one knows for sure what caused the fire or what other substances were present. But the key to fighting the Bryan blaze was knowing the chemical involved and its risks, said Bryan Fire Marshal Marc McFeron.

Volunteer fire companies operate on shoestring budgets and many rely on local emergency planning committees to keep them informed about potential chemical threats. In McLennan County, the committee had not held a full meeting since 2011, said Frank Patterson, the county's emergency operations coordinator.

And he had not read a report from the fertilizer company that outlined its chemical supply.

Texas does not require any training for volunteer fire companies, though most do so independently, said Chris Barron, executive director of the State Firemen's and Fire Marshal's Association. Often volunteer firefighters receive first-level certification that provides an overview of fire-suppression and rescue techniques.

At least 20 of West's 29 firefighters had such training, Barron said. It teaches that oxidizers such as ammonium nitrate "will accelerate burning when involved in a fire" and "may explode from heat or contamination."

In West, however, firefighters appeared to focus largely on the chemical with which they were most familiar — the anhydrous ammonia, a liquid fertilizer that has a risk of producing a toxic chemical cloud in an accident.

Doreen Strickland, president of the volunteer firefighters from nearby Abbott, pulled up to the plant as it exploded. One of her fire trucks was lifted in the air and slammed back down. Some of her men were inside, and she knew they had to be dead. At least three were killed. But she heard no one discuss ammonium nitrate ahead of the massive blast.

"Our main reason for evacuating at that time was because of the heat and intensity of the fire, and it was so close," Strickland said. The anhydrous ammonia "was a major concern."

Dr. George Smith, medical director of the town's ambulance service, knew the facility had fertilizer chemicals. He didn't know about ammonium nitrate and said he wasn't thinking of an explosion. He, too, imagined a lethal chemical cloud.

He ran to the nursing home to move residents to the side of the building farthest from the plant, placed damp towels in the door cracks and prepared to turn off the air conditioning.

"Fully engulfed," firefighters reported at 7:41 p.m., according to radio transmissions and call logs. They asked for a ladder truck, an extra ambulance and other help.

"Advise, big explosion and shook every house," another said.